5 Japanese Words That Don’t Translate From Japanese to English 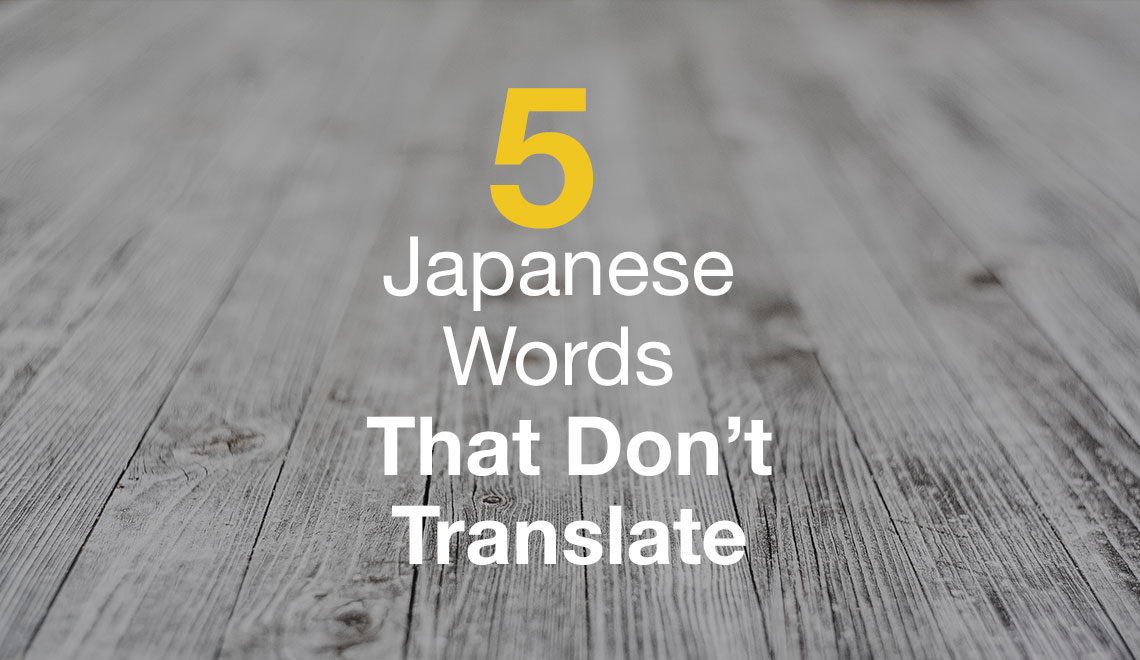 When you’re learning a new language, you’re likely to stumble across words for which there’s no equivalent in your native tongue. Japanese is no exception. There are nuances of societal expectations conveyed through language that just don’t make sense when directly translated from English to Japanese or vice versa. Often, the words for which there is no Japanese to English translation have important things to teach us about regional traditions and culture.

When you use a google translate of English to Japanese words, you’ll not only open yourself to misunderstandings by potentially using the wrong words in the wrong context. You’ll also miss the chance to learn more about Japanese philosophy and daily life. So step this way for a deeper dive into Japanese words that don’t translate from Japanese to English and what they can teach us about the language, its culture, and the people.

You know that feeling when something is too hot to eat and you find yourself blowing on it incessantly while others get right down to business? The Japanese have a word for this and its nekojita (猫舌) or “cat’s tongue.” While it might sound similar, this Japanese word has no relation to the English idiom “cat got your tongue.” It simply means food or a drink is too hot (not to be confused with too spicy) for you to eat.

This word for which there is no Japanese to English equivalent is one of many involving cats or neko (猫). These furry balls of feline play a prominent role in Japanese culture that goes well beyond the global appeal of Hello, Kitty. The Japanese have kept cats as pets for more than a thousand years and Japanese folklore depicts cats as symbols of feline good fortune.

Dogeza (土下座) is a gesture steeped in tradition and Japanese etiquette, where one kneels prostrate with the forehead touching the ground as a sign of humility. It can be used as both a way to show deference to someone of higher status such as the nobility or as a demonstration of shame or disgrace during a heartfelt apology. Occasionally it can also be employed when imploring someone for an important favor.

In English, we sometimes use the word “kowtow” as a rough equivalent, which is derived from Cantonese for a similar gesture of subservience in Chinese traditions. Bowing one’s forehead to the ground is considered the highest form of reverence in many Asian cultures, but the practice also has roots in shame rather than straightforward humility.

“Get on your knees and beg forgiveness.”

While referring to something as blue usually implies a feeling of depression in English, the Japanese translation of seishun (青春) or “blue spring” instead implies excitement or buoyancy. The Japanese use this term with a certain amount of nostalgia and fondness, describing the “springtime of youth” as a time of happiness and hope.

In anime or manga, seishun often means falling in love or the thrill of the more intense feelings you might experience as a teenager or young adult. Because many associate this human awakening with the natural awakening of spring, the Japanese phrase speaks to a universal idea that has no English equivalent.

It is said there is hospitality and then there is Japanese hospitality which seems to be in a class by itself. Japanese hospitality is referred to as omotenashi (おもてなし), but it conveys much more than the English equivalent. In Japan, anticipating a guest’s needs takes on something of an art form and those who wait on customers or clients spend years training to exceed expectations.

The Japanese word omote means “public face” and “nashi” means nothing. Motenasu also means to entertain and “O” is an exalted prefix that confers respect. As Tokyo ambassador Christel Takigawa explained to the Olympic Committee, the Japanese way of receiving guests means that no service, however insignificant, is left unanticipated in order to communicate the respect that is at the heart of Japanese culture.

“Thank you for your hospitality. I appreciate it.”

While the literal translation from Japanese to English of the word itterasshai (行ってらっしゃい) is “go on your way,” it’s not as dismissive as it sounds. In Japanese, it’s a way to wish someone well as they depart and to urge them to return. The person who leaves will say ittekimasu or “I’ll go but come back,” and the family member or friend will echo back itterasshai, which means “please go and come back again.” You might also hear family members use tadaima, or “I am home now,’ followed by okaeri, or “welcome home.”

Both the Japanese word itterasshai and its callback derive from the verb iku which means to leave or to go. You can think of the usage of this Japanese word as similar to the phrase “see you later” or “take care,” but avoiding using it interchangeably with goodbye. The word implies you’ll be coming back to the place you’re leaving and imparts well wishes for your safe return.

“Go and come back safely!”

Mari Ito, a Rosetta Stone Japanese language coach, says seishun (青春) or “blue spring” is a great example of the theory of Yin-Yang and the Five Elements. According to this theory, each season has a different color. Spring is blue ( 青春), summer is red (朱夏), fall or autumn is white (白秋), and winter is black (玄冬). A Japanese novelist first used the word blue spring (青春) to describe the meaning of youth in his book and the phrase became part of the language and is often used today.