A Spanish Journey through Latin America

After spending a year improving my Spanish speaking skills with Rosetta Stone’s app, it was fun to take the leap and explore three different Spanish-speaking countries. I took my language learning process to a whole new level by traveling through Latin America and practicing along the way. In each country I visited, I sought out to find locals who are experts in what they do to teach me about their countries’ history, culture, and local traditions. From Colombia to Argentina to Mexico, I had so much fun getting Lost With Locals.

What to Call a Local in Spanish-Speaking Countries

My first stop was a visit to the region of Antioquia. This was my second visit and such a different experience since I was now able to speak so much more of the language. Medellín is known for its street art, cocktail bars, exotic fruits, and one of the largest flower festivals in the world, Feria de Las Flores.

My time in Medellín, the city of flowers, was centered around Feria de Las Flores and one of the most unique desfiles, or ‘parades’, I have ever been to. All of the local flower growers who carry giant wooden frames on their backs, silleteros, come down from the countryside to celebrate. It’s a symbol of the culture in Medellín. I arrived a few days early because I wanted to see the small town of Santa Elena where many of the flower growers live including one of the famous silleteros, Jose Ignacio. He showed me around his house and farm and filled me in on all of the components from start to finish of getting ready for the desfile, or parade.

When the day of the parade finally arrives, it was unlike anything I had ever seen. In Feria de las Flores there are six different categories people are judged on, including one for the kids, and over 600 silleteros. It’s really backbreaking work carrying the silleta’s, giant wooden frames with floral designs on their back. All in the name of tradition, the parade itself was one of the most colorful I’ve seen around the world.

Language Tip: In Mexico, Zocalo is the word that is used to refer to the center of the town. In the small colorful town of Guatape, they call the hand-painted borders in town Zocalos.

Local Fruits and Cocktails of Colombia

Another place that was on my must-visit list is the most colorful town in Colombia – Guatape. I climbed to the top of El Peñol, more than 650 stairs, in Guatape to gain perspective on the beauty of the countryside that surrounds the small town. It was muy teso, or very hard, climbing up, but the 360 views were well worth it.

Inside the town of Guatape, the color pops everywhere you turn, from hanging plants to bars, restaurants, and churches. The houses are covered in color, too! I met up with a local pintando, or painter, named Nacho to learn more about the history of the town. Nacho had painted over half of the town and now his son is carrying on the family business painting the Zocalos with him.

I always say you can’t visit a destination and leave without exploring one of the local markets. On this trip, I was interested to learn more about the cocktails scene in Medellín. My new friend Juan David, an award-winning bartender, took me to his favorite local market where he gets ingredients for the local cocktails he creates. Exploring La Plaza Mayorista, we picked out local fruits. Among them was one of my favorite—the lulo fruit. It has a sour bite and makes the perfect fruit for blending in drinks.

After our time at the market, we went back to the bar he owns, Old Tom Gin Bar to make a few cocktails. I was a bartender back in the day but it had been a while. Working aside Juan David was super fun. I even learned a few new Spanish words. Macerador, or muddler, was my favorite because it was such a tongue twister to say.

Buenos Aires is a city full of adventure—the underground food scene, and the birthplace of tango and also polo.


Dancing the Night Away in Buenos Aires

Next up to explore was Buenos Aires, Argentina and just in time for the Tango Festival. I learned to dance, or ‘bailar’, the tango at one of the free classes offered during the festival, and followed around two professionals in the festival as they made it into the semifinals of the competition. I even had a chance to go backstage and see everyone warming up. The competition is fun, but that’s not where the dancing ends each day. People love to stay out late and dance the night away at a Milanga. After my practice session, I performed much better on this night out.

Language Tip: In Buenos Aires they speak castellano, which is a dialect of Spanish. Two ll’s sound like ‘sh’ and they use a lot of ‘sh’ for ‘ll’ words in Argentina.

When your think of polo, you think of Argentina. And for good reason! Half of the world’s polo players originated in the destination. I met up with local pro, Julito Cezares, at Puesto Viejo, an estancia, a large plot of private land in the countryside, to try my hand at the game for the very first time. We toured the stables, I suited up in my botas (boots) and casco (hat) before hopping on my docile horse and learned to play. It’s a lot harder than it looks, but when you have a good teacher you can catch on pretty quickly.

Language Tip: When in Argentina, you might hear the word ‘vos’ being used. It’s essentially synonymous with how you use ‘tú’ in Spanish—an informal pronoun. Be careful, however, because when used as a tense, el voseo changes verbs’ suffixes.

Guadalajara is a place of contrast. You’ll find a modern food and arts scene among centuries old architecture. It’s a place of tradition and my time in outside of the city was spent exploring just that.


Day of the Dead in Mexico—Día de Muertos

A tradition most known for being celebrated in Mexico, Día de Muertos is where people celebrate their loved ones who have passed on and remember them in a truly special way. Tlaquepaque, a suburb of the city, is where many locals go to partake in festivities. The streets are filled with sugar skulls, pan de muerto (dead bread), and people getting their faces painted in bright colors to represent those who have passed away.

The streets are lines with altars—each have a significance from the person who has passed away. Altars are decorated with marigold flowers, a favorite food or drink, or picture of the family member.

Language Tip: There’s a lot of back and forth about if it’s said Día de Muertos or Día de los Muertos. Most locals I met said Día De Muertos.

Mexico has some of the best food in the world, and I always love tasting my way through a city by trying all of the traditional foods that come from a place. Guadalajara was no different and I’m pretty sure I left a few pounds heavier thanks to the torta ahogada which translates to a drowned sandwich. Make sure you have plenty of servietas, (napkins), for this one. Birria, braised goat, is a great one for a hangover. You can have it as a soup or as a taco. Posole, pork, hominy and always topped with fresh herbs, is a delicious soup and the verde, or blanco, comes from Guadalajara. We ended up at Gudelajara’s oldest bar to wash everything down with a tequila.

I’m really into exploring origins and how things are made, so I planned a trip to visit the small colorful town of Tequila and visit the distillery that brought tequila to the world—Jose Cuervo. There are many types of agave, but in order to make tequila you have to use the blue agave and there is what seems like a sea of it everywhere you turn.

Cuervo taught me all about the origin, how to properly harvest the agave from the earth,the process it goes through while cooking, and of course tasting the final product was my favorite part. I like the super aged extra añejo, which has a delicious caramel flavor.

Rosetta Stone helped me confidently speak while touring around three different countries and it was really interesting to learn along the way on the ground while noticing different ways locals speak in their own local dialects.

TRY IT FOR FREE
Tags: Latin American SpanishLost with Locals 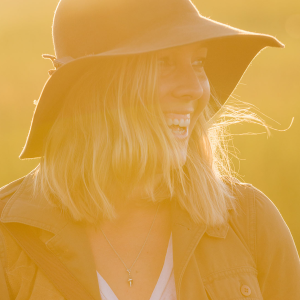 Kristen Kellogg is the founder and creative director behind Border Free Travels. When she's not out exploring and filming the world, she's planning trips for others through her sister company, Salt & Wind Travel, showing clients how to have more meaningful experiences around the world.

Kristen Kellogg is the founder and creative director behind Border Free Travels. When she's not out exploring and filming the world, she's planning trips for others through her sister company, Salt & Wind Travel, showing clients how to have more meaningful experiences around the world.

Learner Q&A: Growing Up and Raising Children with French in Louisiana with Ryan Verret