What is Arabizi? Here’s a Quick Guide to Help You Understand the Arabic Chat Alphabet

If you have any Arab friends on social media, you may have noticed that when writing in Arabic they often mix numbers in the middle of their words.

While this may seem a bit confusing at first, it’s totally normal––it’s called Arabizi. Arabizi refers to the Arabic chat alphabet predominantly used by young Arabs when communicating digitally. It is a product of the globalization of English-based technology, which made many people reliant on the Latin alphabet to communicate. I definitely encourage you to learn the Arabic alphabet if you want to understand the true essence of the language. However, it’s also important to be familiar with Arabizi, as it’s very popular online.

You’ve seen how you can make sense of Arabic words when writing them in the Latin alphabet. Reading them in your default alphabet can also help you learn how to better pronounce the words. But what about those letters that have no English equivalent? If you’ve learned these letters, you’ve probably found yourself at a learning curve trying to pronounce them––which is totally normal, given that the phonetics between English and Arabic are so different. This is where the numbers come into play. Let’s look at a a few examples:

Notice how the actual letter kind of looks like the number 7. A couple years ago, I was scrolling through my Facebook timeline and noticed a comment thread between two Lebanese friends I knew from college. I noticed that the first comment said, “7elweh kteer!” (very beautiful).  At first, I thought it must have been a typo. However, I noticed that more words contained random numbers, so it must have been done on purpose. I later learned that this is very common, and the 7 was replacing the ح (Haa), which is a stronger “Hh” sound than the ه (haa). In formal Arabic writing, the comment would have said, حلوة كتير. If you decide to learn Arabic, you’ll notice that pronunciation is one of the biggest challenges––but it’s equally rewarding!

Do you see how the ع (‘ayn) looks like a backwards number 3? This was by far the most difficult character for me to learn to pronounce well––it literally took me months! I watched in awe as native speakers pronounced it so seamlessly in casual conversation, while I on the other hand sounded like I was about to vomit (if you know, you know). If you write the letter “a” in place of the  ع , chances are that native speakers will know what you mean. But, why not take a chance and try to text your Arabic-speaking friends like a local? Arabizi is your friend! Let’s say, for example, you want to text your friend to come over to your place. You can say “t3ai 3andi” (تعي عندي)  if you don’t have the Arabic keyboard on your phone or laptop.

I can see how this kind of looks like a 9, though it’s less intuitive than the previous two. When learning the alphabet, you may have asked yourself, “is there really a notable difference in pronunciation between ص (Saad) and س (siin)?” While it may not seem like it, there definitely is a difference–– ص is a slightly stronger “s” sound, so merely typing the “s” in the Latin alphabet doesn’t quite convey it well. As you saw in the video, if you want to type, “good morning,” (صباح الخير) using Arabizi, you can say “9ba7 el 5air” (read below for more details on the 5).

I don’t think the character looks much like the number, but I promise it’ll stick once you memorize it. In the first video of our Speaking of Arabic series, we went over the meaning of khalas (stop it/enough). It’s a very common word. Next time you say it to a friend over text, try saying “5alas” rather than خلص.

I definitely see the resemblance here, which makes it way easier to remember. Imagine you’re getting to know somebody over text, and you want to ask him if he’s a student at the university. Using Arabizi, you can ask, “Ente 6albeh bel jam3a?” (انت طالب بالجامعة).

Say your friend has just texted you asking to come outside, because she’s driving the both of you to a party. You’re not quite ready yet and need 5 minutes. In this case, you can text her, “bidi 5 da8aye8” (بدي ٥ دقائق) .

You may have learned that, when the أ is accompanied by a ء, there’s a subtle glottal stop in pronunciation. The 2 in Arabizi emphasizes that. Imagine you’re hungry and want to grab a bite of food with friends. You can text them, “2na je3an” (أنا جعان).

You might find that some people type these words a bit differently than I did. As you saw in this video, that’s because it’s not standardized––which is great, because there really are no right or wrong answers. While some language enthusiasts argue that Arabizi is losing popularity among new generations, most of my Arab friends say it’s their preferred informal way of communicating online and via text. I say you give it a try and decide for yourself! 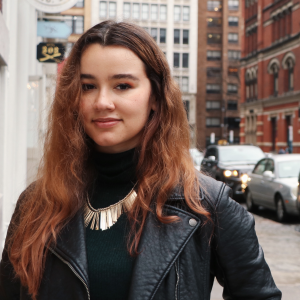 Daniela Cantillo is a language enthusiast who speaks Spanish, English, French, Portuguese, and Arabic. She is currently pursuing a Master's in International Affairs with a concentration in Media at The New School. Daniela loves travel, food, and warm weather. She is a photographer, writer, and aspiring filmmaker.

Daniela Cantillo is a language enthusiast who speaks Spanish, English, French, Portuguese, and Arabic. She is currently pursuing a Master's in International Affairs with a concentration in Media at The New School. Daniela loves travel, food, and warm weather. She is a photographer, writer, and aspiring filmmaker.

Learn The Meanings of Wallah, Yallah, and Other Super Addictive Arabic Words