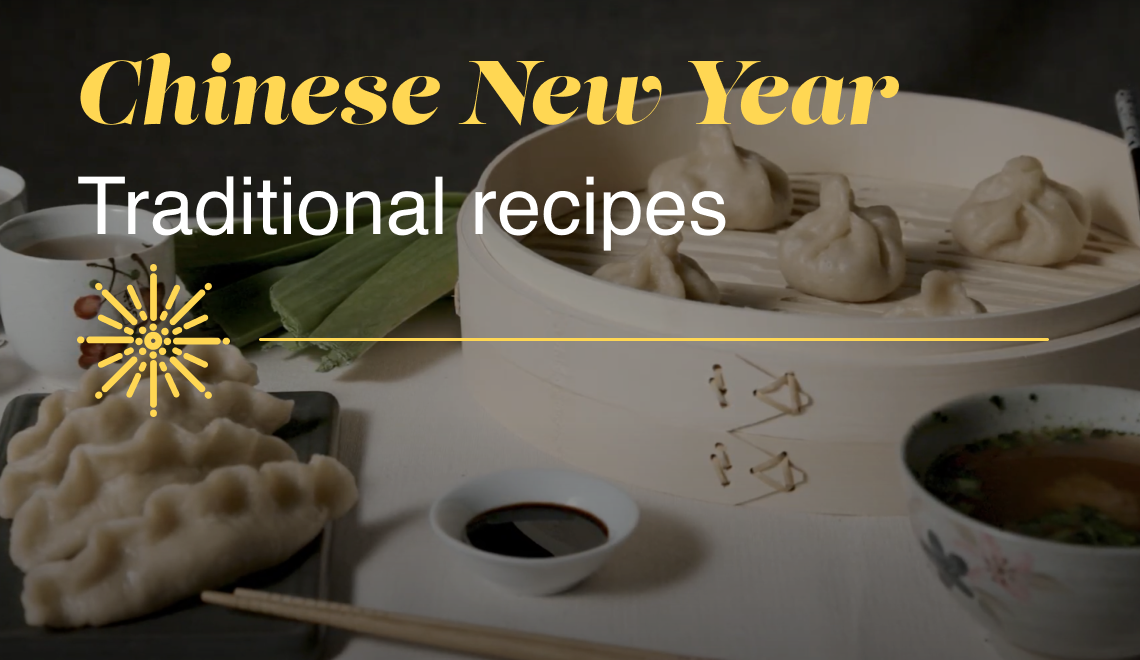 Our Micro-Sized Holiday Meals series scales down culturally-rich recipes that are traditionally meant for feasts, so you can get a taste of different holidays around the globe while.

As we bid goodbye to the year that’s passed, we hope the approaching one will bring us better fortune than the last. Like any other respectable Chinese person, I intend to wear lots of red, feast until I pass out, and catch up with my family members over Zoom. My Chinese heritage is from the southern province of Canton and when my grandparents moved to Malaysia in the early 1950s, they brought their culture along with them. Like many of the Chinese diaspora spread across the world, we celebrate Chinese New Year as if we had never left China.

Currently, I work and live in Hong Kong while most of my family members are back in Malaysia. This will be the first year where I won’t be traveling home for the holiday, but it will also be the first year where I would have to give red packets instead of receiving them. It is a Chinese custom to hand out red packets (红包 hongbao in Mandarin) to the younger, unmarried members of the family once you get married (and presumably older) yourself. You will find bills in your local currency inside these packets, and the closer you are to the giver the higher amount of money you will receive. They are supposed to symbolize luck and happiness and even possess the power to ward off evil spirits!

Chinese New Year, also known as Spring Festival, marks the beginning of a new lunar cycle and is considered as the most important festival in China. The tradition is so crucial that travel during the one-week period leading up to the holiday has been proclaimed as the world’s largest human migration. Food is one of the things that Chinese people take the most pride in, which is why so much of the celebration centers around eating together. Family reunion dinners on Chinese New Year’s Eve (团年饭 tuan nian fan in Mandarin) are taken very seriously, and starting the new year with those closest to you is essential to the holiday.

Eat and you shall prosper!

Similar to many other festivities like Three Kings Day and Easter Sunday, the foods eaten during the festival carry symbolic meanings. “Lucky” food is served during the 16-day festival season, especially at tuan nian fan, which is believed to bring good fortune for the coming year. The most common traditional foods include dumplings, fish, spring rolls, and glutinous rice cakes—depending on which region you come from. While spring rolls (春卷 chun juan in Mandarin) are popular in Southern China to literally celebrate the coming of spring, dumplings are eaten in the North.

The auspicious symbolism of these traditional dishes derive from their pronunciation or appearance. For example, fish (“yu” 鱼) in Chinese sounds like “surplus” (yú 餘) and Chinese people think that if they manage to save some money by the end of the year, then they can make more in the next year. A customary greeting related to this dish is “May you always have more than you need!” (年年有余 nian nian you yu in Mandarin).

What Chinese words do I need to know for the holidays?

Here are some useful words to know for the celebration, including some very yummy foods:

The following phrases are common new-year greetings to use with those you see during the holidays:

What is a jiaozi?

Jiaozi is your go-to staple of northern Chinese comfort food. Nothing feels more nurturing to the soul than these delicate dumplings. They could have a variety of fillings, with pork and cabbage being the most popular. They generally consist of minced meat or shrimp and finely-chopped vegetables wrapped in thin and elastic dough skins. They can be boiled and steamed, served with black vinegar dipping. They can also be pan-fried and these are called guo tie, which means pot stickers. The making process is a family bonding activity and every member of the family participates during New Year preparations.

In Chinese, jiao means exchange and zi indicates the midnight hour. When you put the two words together, it could be understood as the exchange between the old and new year. Hence dumplings are normally wrapped throughout the night, sending away the old and ushering in the new.

Sometimes, a copper coin is put inside a dumpling and the lucky one who eats it is supposed to become rich. A tip to those eager to start making their own dumplings is that there should be a considerable amount of pleats as this shows one’s increasing affluence.

Is there a difference between jiaozi and baozi?

Baozi is a type of yeast-leavened filled bun that is normally steamed. These steamed soft buns could have all kinds of stuffing inside such as pork, seafood, vegetables and even sweet paste like red bean and lotus seed. They are most commonly eaten as breakfast with congee or warm soy milk. You can find them in most dimsum tea houses in Canton province or in Hong Kong. In some cities of south China, you will find a variation called mantou instead.

The main difference between baozi and jiaozi lies in the size and texture. While jiaozi are smaller and do not contain yeast, baozi are usually larger and fluffy on the outside. Similar to a burger, baozi are excellent takeaway items, while jiaozi usually requires you to stay still and eat them with chopsticks (or hands if you are really in a rush).

What is the history of these dishes in China?

During the ancient times, jiaozi were folded to look like boat-shaped ingots—the gold and silver pieces used as money in the past. It represents being prosperous since you are eating all this money. As a result, Chinese people still eat jiaozi during Chinese New Year as they are meant to be lucky foods that bring wealth.

Meanwhile, rumor has it that baozi originated from the Three Kingdom Period (220-280 AD), created by a famous Chinese military strategist named Zhu Ge-liang. Zhu and his soldiers had defeated their enemies but upon their return, they faced a mighty river that looked impossible to cross. The river was allegedly said to be closely guarded by a deity, who refused to allow safe passage to them unless Zhu threw the heads of 50 of his men into the river. He had the ingenious idea of ordering 50 buns that looked like human heads (round tops, flat bottoms) to be thrown in instead. The deity was deceived and Zhu and his soldiers managed to cross the river safely.

How is Chinese New Year celebrated in Hong Kong?

The new year is the most significant annual celebration in the city, with a plethora of festivities, such as the dazzling fireworks over Victoria Harbour, the mad rush at Wong Tai Sin Temple, and ubiquitous flower markets and lion dances throughout the city. The biggest event has to be the Carnival, with its daily parades of musicians, acrobats, lion dances, and flashy floats sporting red and gold trickling down West Kowloon Promenade.

Chinese New Year is about reunion—a time of putting the last year to bed and opening our curtains to a new year. For example, the Lunar New Year is the perfect occasion to declutter and clean your home. You are advised to do it by New Year’s Eve though and once completed, store away all of your cleaning equipment, otherwise superstition tells you that you will sweep your good luck away!

Last but not least, greet your friends and family, as well as acquaintances, with the lucky wishes I had written down above. Make sure your internet connection is reliable, as you don’t want to be saying the wrong things due to delays during the call. If you are still unconvinced about eating all these metaphorical foods for a positive start, try making these delicious jiaozi and baozi at home and surely, you will change your mind. Just remember to share them with your loved ones. Xin Nian Kuai Le!

Recipe for How to Make Chinese Dumplings and Steamed Buns

Directions:
1. Mix together the water and flour being careful not to knead too much.

2. Form the dough into a ball, cover and let it rest.

3. For the filling, heat oil in a large wok and add your vegetables as well as salt and pepper.

4. Add 2 Tbsp. soy sauce and saute in the wok until the color becomes vibrant. Continue to cook until they develop a gorgeous golden tinge. Place filling into a bowl and let it cool.

5. To form your dough, start by sprinkling all-purpose flour onto a cutting board. Place the dough ball onto a floured surface and knead your dough a little to create an even elasticity. Roll dough into a log and cut off a piece to form a ball that fits in your palm. Cover the rest of your dough as you work with a damp cotton cloth. Roll your small ball of dough flat. Add your filling.

6. For steamed buns, fold two ends together. Bring opposite ends to meet in the middle. Use fingers to make X shape on the top. Fold each corner on top to come to one point. Twist and pinch to close. For steaming, fit a sheet of parchment paper with slices for holes to your bamboo steamer. Add your dumplings, cover, and place onto a pot of boiling water to steam for 15 to 20 minutes.

7. For dumplings, fold two ends together. Pinch along the top to close the dumpling. Use your fingers to add ripples on the top seam. Wrap up accordingly to how you wish to shape it. For boiling, add your dumpling to boiling water. Being careful not to let the dumpling touch the bottom of the pan. Once it rises to the top, let it boil for a few more minutes before taking out.

8. Once it rises to the top, you have a few minutes before it’s ready.

Showing Respect in Japan: A Primer on...