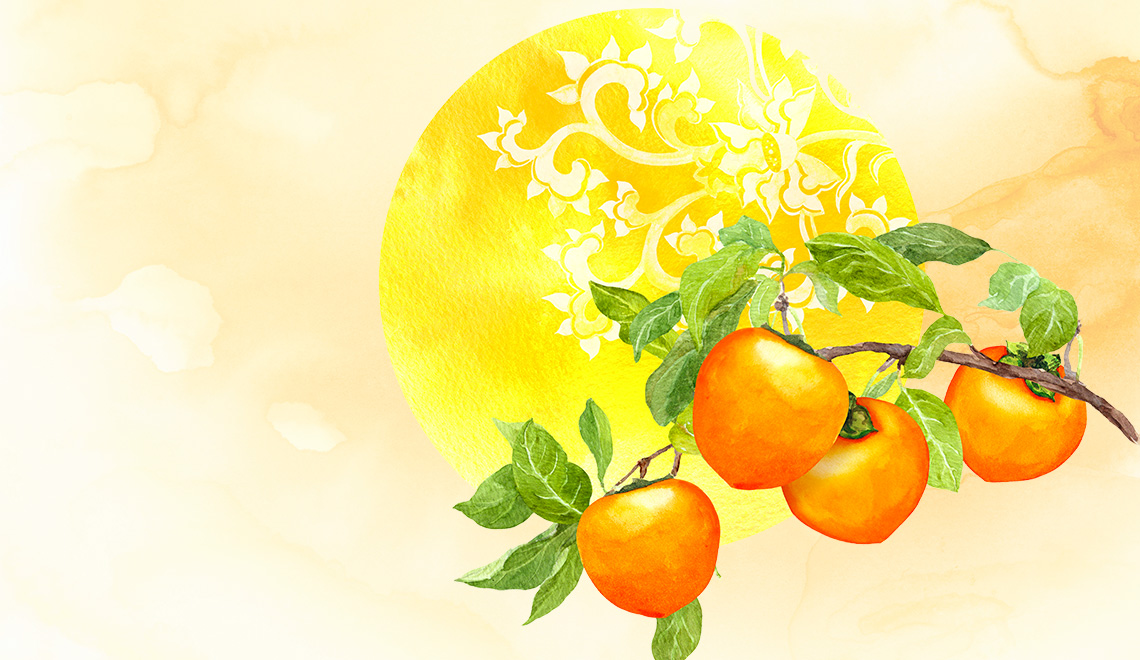 Chuseok (추석), which translates into “autumn eve” in Korean, is a three-day holiday celebrated in both North and South Korea. Sometimes referred to as Hangawi (한가위), the Chuseok festival pays homage to the agricultural cycle by ushering in the end of summer and the full harvest moon. It’s also a Thanksgiving day of sorts for Koreans as they return to their ancestral homes to spend time with family. Chuseok is notorious for the massive traffic jams it causes on Korean roads as millions migrate out of Seoul for the holiday.

Central to Chuseok celebrations is the family feast, which features a special, colorful rice cake called songpyeon (송편; 松편). It is traditional for the first son in the family to set and prepare the table to honor the family’s ancestors, and children will sometimes wear hanbok—traditional Korean dress to pay respect to their elders.

For the traditionally minded, Chuseok morning often begins with ancestral ceremonies, including the tidying of the graves of family members and bowing rituals performed at the gravesite to honor deceased ancestors. Charye (차례, 茶禮) is a kind of tea rite that takes place in the home during Chuseok, where the family pays homage to ancestors in front of an altar covered in food and other offerings.

During Chuseok, Koreans play or watch folk games such as ssireum (씨름), a popular sport that resembles wrestling. Gifts are also exchanged between family and friends, a tradition that started back in the 1960s when Koreans exchanged daily necessities like soap and sugar on Chuseok.

Koreans consider songpyeon emblematic of Chuseok in the same way Americans think of turkey as an essential part of their traditional table. Songpyeon dough is made with a specific kind of short-grain rice powder and usually brightly colored with natural dyes and flavors. These little rounds of dough are then stuffed with a variety of traditional fillings such as sesame seeds, honey, chestnuts, or red bean paste. Folded over and crimped into half-moons, the songpyeon is steamed on a bed of fragrant pine needles that gives them an aromatic flavor reminiscent of fall.

Specialty ingredients and skill are essential to making songpyeon. Many Koreans choose to make them together as a family, passing down recipes from generation to generation that illustrate the value Koreans place on tradition.

Hangawi: middle of August or autumn

Listen to the full interview with A-Reum Jung to learn more about the importance of Chuseok traditions in Korean culture.

Get a Taste: Songpyeon

One of the less widely available ingredients for these colorful Korean rice cakes is the rice powder. We recommend venturing to an Asian specialty store where you can usually find the rice powder for songpyeon in the freezer section. This recipe uses a honey sesame filling, but chestnuts, red bean paste, and other variations are common. 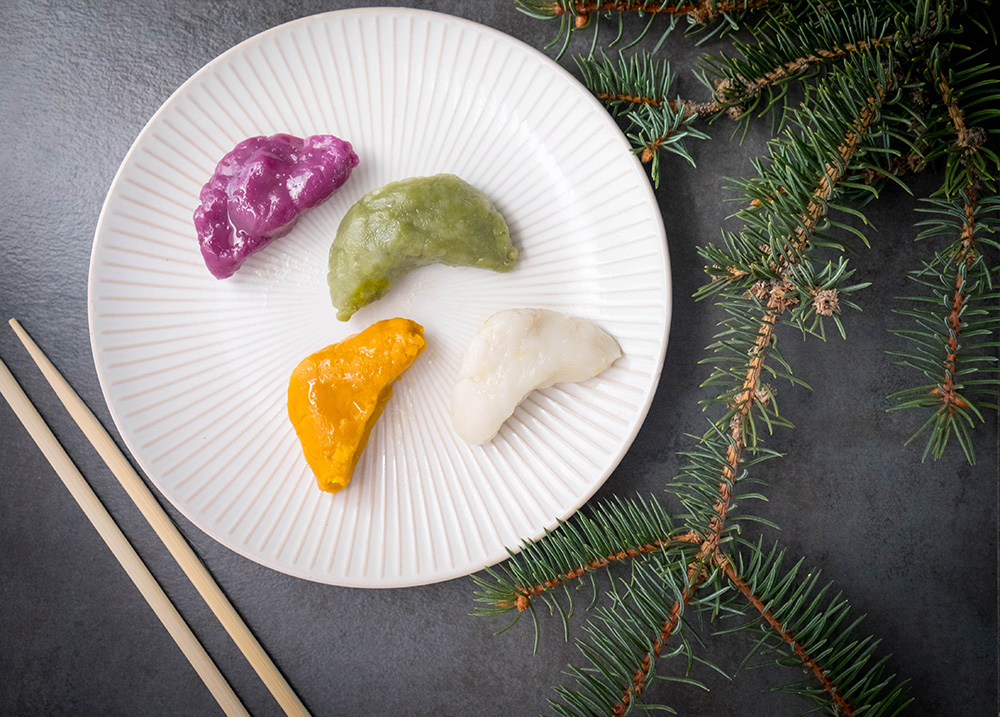 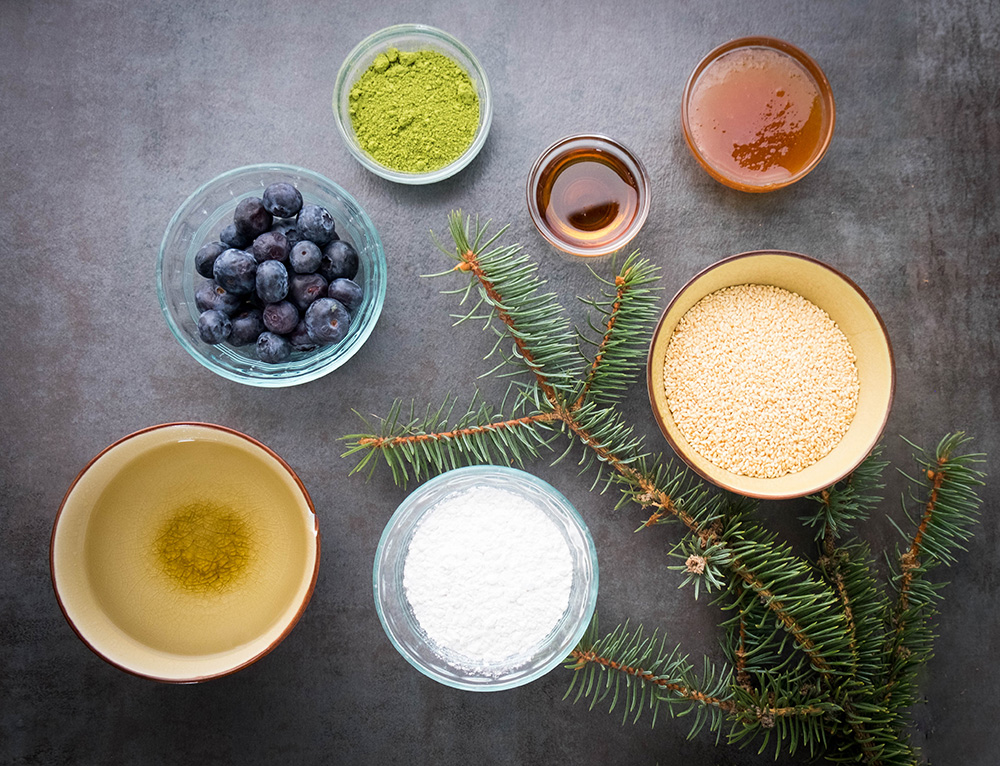 In a small saucepan, combine blueberries with 1-2 tablespoons water. Cook on medium heat, mashing with a fork, until the blueberries begin to break down and the liquid is dark purple. Remove from heat and strain the liquid into a bowl. Set aside.

Sift rice powder into four separate bowls so there is a ½ cup in each bowl. Add matcha to one bowl of rice powder and turmeric to another. Toss with a fork. Make the white dough by adding 1-2 tablespoons of boiling water, combining, and then kneading with the palm of your hand until the rice flour begins to clump together. Add an additional 1-2 tablespoons of boiling water and continue to stir and knead until dough is smooth but not dry. Cover in plastic wrap and set aside. Repeat with bowls of matcha and turmeric rice flour mix, covering in plastic wrap and set aside. For the last bowl of rice flour, add reserved blueberry juice using the same method that you used to add boiling water for the other doughs. Add additional boiling water if needed until dough is smooth but not dry. Set aside covered in plastic wrap.

Make the filling by crushing sesame seeds with a mortar and pestle until fragrant. Combine with honey and a pinch of salt. Set aside

To assemble, tear off a small piece of the dough that’s enough to make a 1-inch ball. Roll tightly between your palms to shape a ball. Make a well in the ball by pressing into the ball of dough with your thumb, and press outwards, with both of your thumbs, on the inside walls of the well to slightly expand the opening. Place 1/2 teaspoon of sesame filling in the well. Seal tightly by squeezing the edges together. Squeeze the whole rice cake lightly in your palm to firm it up, and then gently roll between your palms to smooth out the surface. Shape it into a crescent shape. Pinch along to create a wing. Repeat until all the dough and filling is used.

Remove songpyeon with a long-handled spoon or tong and set in a bowl of cold water, rinsing to remove all the pine needles. Transfer the rice cakes to a colander to drain. Lightly coat your hands with the sesame oil and rub the oil on the rice cakes in batches.

Serve warm or at room temperature 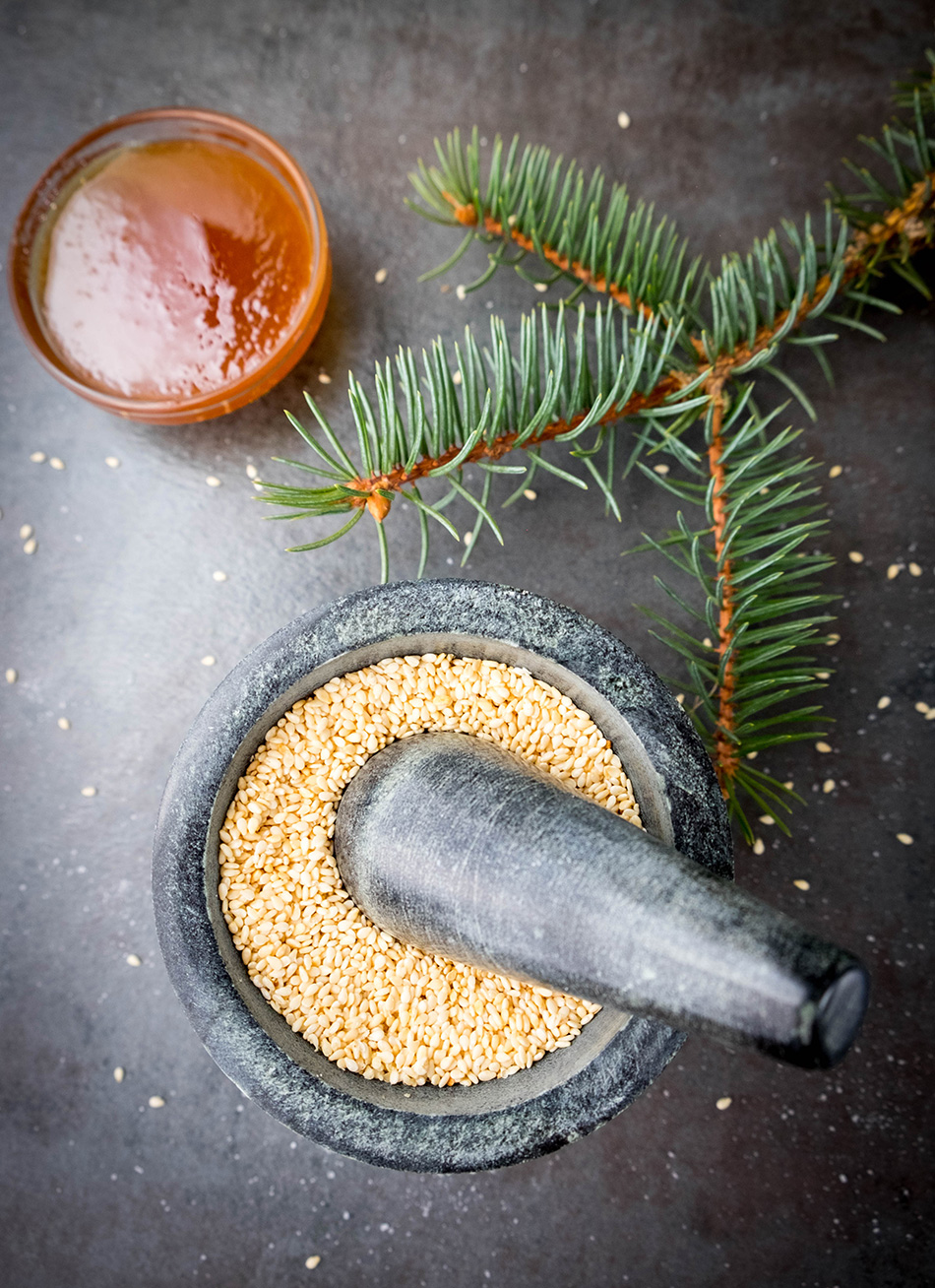 A Primer on BBQ from Around the WorldFoodie Without Fear: Asia Edition

Warming Spices for a Worldly Kitchen This...