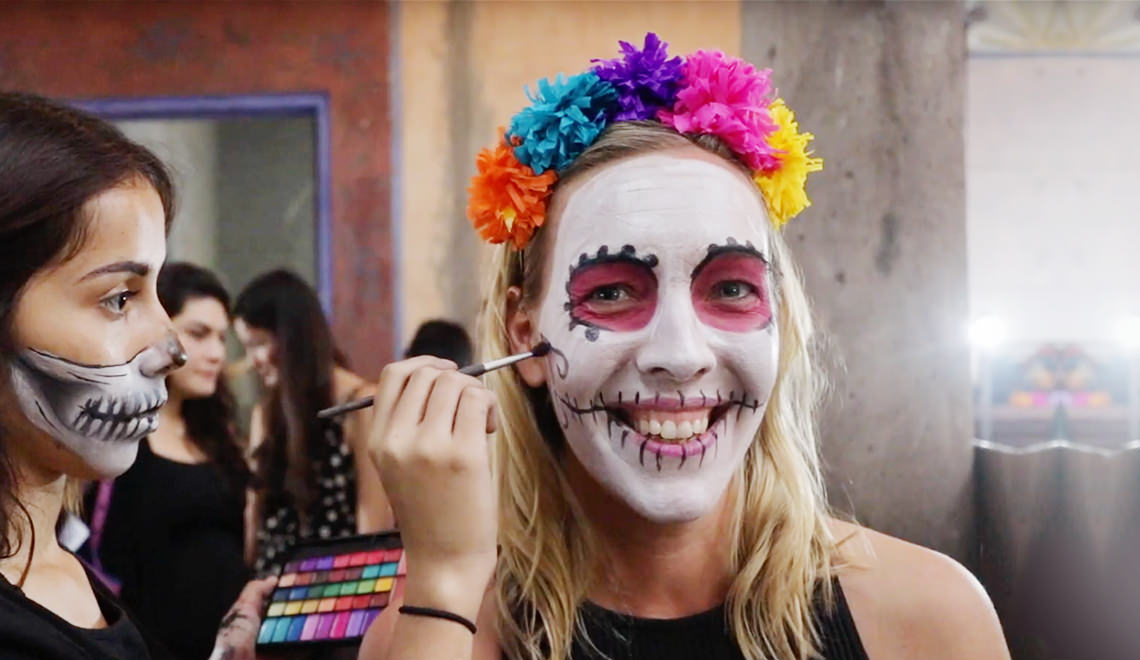 You’ll find tradition running deep throughout Mexico and one of the biggest is Día de Muertos. It’s the holiday most associated with Mexico. It’s a time where families come together to celebrate the deceased who they were very close to and remember them in a very vibrant way. A celebration full of color from candles to flowers, and even Catrinas, Día de Muertos is part of life here as much as any other holiday of the year.

Because I’m curious about all things cultural in the Mexican culture, I traveled to the state of Jalisco to experience my first Día De Muertos in Guadalajara. The area most celebrated where travelers are welcomed to learn and  participate in some of the festivities is about 30 minutes away in Tlaquepaque, a suburb of Guadalajara. I loved the small town vibes while my new tapatio (the word for a local in Guadalajara) friend Alejandro shared so much about the celebration.

First things first—is it Día de Muertos or Día de los Muertos? I have asked all of my local Mexican friends and I’ve heard it both ways. But most people I know skip the los and just say Día de Muertos.

… most people I know skip the los and just say Día de Muertos.

Walking the streets of Tlaquepaque, you’ll find people dressed in an elegant prehistoric sort of fashion and  in traditional clothing that indigenous people used as well as Catrinas everywhere you turn. Catrina, a cartoonized-looking skeleton representing someone who has passed on, was inspired by a painting done by popular Mexican artist José Guadalupe Posada. While celebrating Día de Muertos, you’ll find locals painting their faces and dressing up to resemble Catrina as a dedication to someone who has passed on.

Like everything in Mexico, food is also a big part of this tradition—from what you eat this time of year to what goes on the altars. Sugar skulls are more of a decorative throw to the past, but sometimes eaten by children. Pan de Muerto, also known as dead bread which is a bread covered in sugar in a shape that represents the bones, body and skull, is another food you’ll see lining street vendors. On November 2nd, you’ll see altars all lit up. An altar is a remembrance dedicated to people who are gone and missed. You’ll find a printed portraits of family members who’ve passed on, as well as the deceased’s  favorite foods or drinks, Sometimes the smell of copal is thick in the air which is a tree resin used  in many ceremonial settings for cleansing the soul.

Visit any Mexican market near the end of October and you’ll find tons and tons of marigolds being tossed and piled and sold faster than they come in. Yellow is tradition along with purple to accent. It was said that the pleasant scent of the flowers would make the deceased returning for the night feel happy and welcome.

One of the most unique traditions I’ve seen around the world, Día de Muertos is such a positive outlook on celebrating life. This celebrated holiday is a great reminder to cherish the present and look back on the past with happiness.

Interested in celebrating the Day of the Dead with locals? You might want to know some Spanish first.