Everything You Need to Know for an Intercontinental Move Back to the U.S. 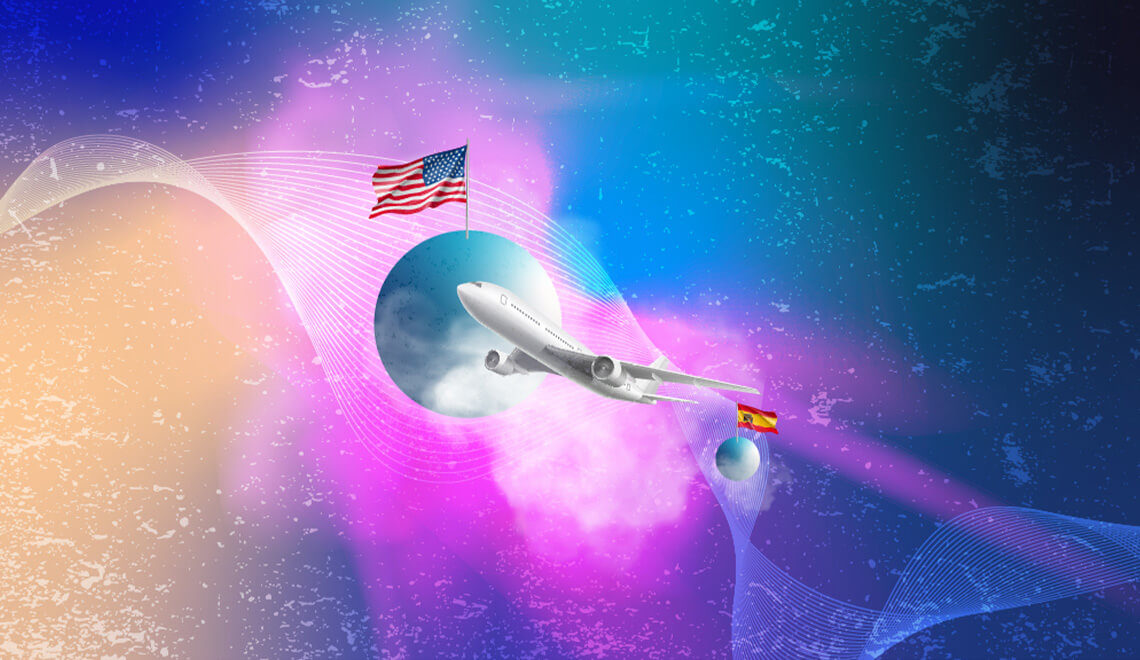 Whether or not America was ready for me again, the time had come. I made the decision to move back to the U.S. months prior, but it was time to put the pedal to the metal upon arriving back to Spain after my trip home to Wisconsin for Christmas. With exactly three weeks and a day to pack up whatever I wanted to bring with me and wrap up all my loose ends, I would have never been able to do it without heavily utilizing the Notes app on my phone to create a hefty to-do list with things to tackle in both countries.

In the months leading up to the move, I read countless articles (and subsequent comment sections) written by fellow expats who had also decided to leave the foreign country they had created a second home in and move back to the U.S. I will tell you right now—the only thing this was good for was the comfort of knowing that other people had done it, too. That, and reading their personal feelings about moving back prepared me for the worst-case scenario. The real takeaway is this: Everyone moves back for different reasons, everyone is moving back to a different scenario, and everyone experiences the feelings that bubble up with a massive change of this nature in different ways.

Feelings are complicated, and I don’t want to influence yours, so let’s stick to actionable items. I don’t care if you hate lists—you’re going to need at least one. Moving across the world is overwhelming, and I can’t be the first person who (unwillingly) gets a little absentminded when under extreme stress. Writing stuff down helps to counteract that, which is why I took a big deep breath and crafted an all-encompassing list; made progress notes as I went; and happily slapped a green check mark emoji next to each item when I had finally completed it.

List-spiration for an intercontinental move

Here’s what was on my list of things to get done before I left Spain and roughly when I did them:

A month in advance:

One to two weeks in advance:

I did start some of these tasks before I got back after Christmas, like looking for flights, the job search, and car hunting. I didn’t buy my flight home until sometime after Christmas, though, and luckily, I got a great deal on a one-way ticket through TAP Air Portugal, where I could easily add on extra checked bags for a nominal fee. I had done a fair amount of research on different carrier services to see how much it would be to send boxes back to the U.S., but it became clear that adding as many bags as possible on to my flight home was going to be the most cost-efficient route. Just so you get an idea—I only paid approximately $400 for my flight, including three checked bags and a carry-on. The actual flight itself only would have been around $200 if I hadn’t needed the extra bags.

Long before I started looking for flights, however, I was spending the better part of every week since late November or early December refamiliarizing myself with the U.S. job market and applying for positions. Having a job locked in for my arrival back to the U.S. was top priority for me, which seemed to shock people for some reason, but I couldn’t fathom getting back to Wisconsin and growing roots in my parents’ couch. I had been freelancing remotely from Spain for months, but I was eager for the stability of a full-time position, so I could just enjoy freelancing on the side.

Easily the most important thing I did during my job search was get a U.S. phone number for a nominal monthly fee via Skype. With this, I could give that number to people and receive phone calls and texts from the U.S. via the Skype app on my phone, using either my data plan or Wi-Fi. Previously, I had started to get frustrated with my job search, because I felt like people weren’t giving me the time of day, because I was still based in Spain. When I updated my LinkedIn page and resume with this new contact information, however, the success I began to have responsiveness from potential employers changed almost instantaneously.

What was most stressful to me, however, was making sure my timing was on point for the tasks that involved bills, important paperwork, or money. I felt like a genius when I realized I could switch to a prepaid SIM card for my iPhone and just get a contract-free plan with a lot of data, so I could use it as a mobile hotspot for my laptop, too. That allowed me to cancel my cell phone and internet contract with plenty of time, because I needed to allot for them processing the cancellation and giving me a confirmation number to schedule a pick-up date for the router. I had to be careful with when to shut my Spanish bank account, too, in conjunction with the last bills I had due, which was a bit of a juggling act. Aside from actually putting together the to-do list, the timing of when I did each task ended up being quite important to make sure I didn’t cause myself any unnecessary grief or issues.

How to get rid of eight years’ worth of stuff

It’s astounding what you can acquire in eight years’ time. In my defense, I set up a life for myself in Spain, and I needed more than just clothes and shoes to get me by. I mean, I also held on to almost every card that was ever mailed to me and, strictly out of fear, every Spanish government document I was ever given, but that’s beside the point. I knew I had three checked bags and a carry-on to work with, and I firmly decided that anything that didn’t fit in those bags had to go. (The only exception to this rule was the one flamenco dress I kept, which I crammed into a box with a set rate via the postal service, because if you know anything about flamenco dresses, you know those ruffles weigh a lot.)

The best tip I can give you is to start by getting rid of any and everything that you absolutely do not want or need. By clearing the visual clutter from your apartment of all unnecessary items, you can more easily make decisions about the items that are left ala Marie Kondo. When it gets down to the wire, there are definitely still going to be things you throw away in a flurry of “Oh my God, get this out of my eyesight immediately,” but the bulk of it should be gone before you ever start packing.

From there, I went through and picked out books, decor, household items, and other odds and ends that I knew certain friends of mine would love, and I gave it to them. I’m a big-time reader, and always have been, but I couldn’t believe how many books I had lying around. After giving many away, I contacted a local expat group via Facebook that does monthly book swaps, and I organized to meet the group’s leader and drop off a giant IKEA bag full of books for them to enjoy. A good friend of mine was actually moving into my apartment, so the couple of bigger items I had purchased, like my oven and baking supplies in the kitchen and a shelving unit in the bathroom, I left for her. They made the apartment more liveable, she wanted them, and it made the move a heck of a lot easier for me.

Sorting through my clothes was surprisingly the easiest part of packing and moving, as over the years, I had finally gotten into the habit of periodically going through my wardrobe and donating anything that I don’t wear, don’t like, or no longer fit. There are donation bins all around the city in Seville, but the H&M stores also take clothing donations, with which they recycle the fabric to make new clothes. Now that I am a couple of months into being back in the U.S., though, I have to admit that there are a few pieces I donated and regret doing so, specifically two coats that I had—a handmade bright coral pink patterned wool coat that I bought in the mountains on Grand Canary Island and a vintage oversized Aztec blazer-style coat I had brought with me from Wisconsin. The bulkiest items, i.e., coats, are sadly where the hardest decisions had to be made, and I opted to keep the more neutral, timeless ones I had, because #adulting, I guess.

I’ll never forget the first time I experienced reverse culture shock. It was the first summer I came back home for a while after living in Spain for a year, and my brother had tickets to see Fleetwood Mac at a huge arena outside of Chicago. What sounded like a once-in-a-lifetime experience and bonding opportunity turned into what gave me my first panic attack. Coming from small-town Spain, a massive concert venue with throngs of people packed in the nosebleed seats like sardines set me off in a way that I didn’t anticipate.

Naturally, after having been abroad for eight years, I expected a stinging slap to the face of reverse culture shock upon moving back. But guess what? No slaps! I attribute this entirely to the fact that I was both mentally preparing myself to move back for months and genuinely excited to move back, which I know is definitely not the case for everyone. I wanted to move back—I didn’t have to move back. Nobody forced my hand. Despite still being shocked by portion sizes and an unfathomable amount of options for everything, adjusting to the American way of life wasn’t too much of an adjustment for me. There was so much I had missed after being abroad for so long that everything I’ve gotten to do, taste, see, or try feels extra special to me now.

Ask me any time, any day, and I will tell you that moving abroad is the best thing I’ve ever done in my life. Living in Spain was a wild ride that I never expected to go on, but I don’t regret a single moment of it. If there’s one thing that sticks with you after reading my story, I hope it’s this: If you have ever even had an inkling that you want to move abroad (for three months, six months, a year… it doesn’t matter for how long), do it. It’s possible, it’s exciting, it’s fun, it’ll give you a lot of good stories to tell (and photos for the ‘gram), and while it’s not always easy, it will always be worth it. Research the shit out of it, don’t be afraid to reach out and make connections with people to help you along the way, and make it happen. You’ll have a loyal reader in me when you write it about it one day, too—I can’t wait to hear about your adventures.