Home Culture From Russia with Love, the Cyrillic alphabet and … an Axe
Culture

From Russia with Love, the Cyrillic alphabet and … an Axe 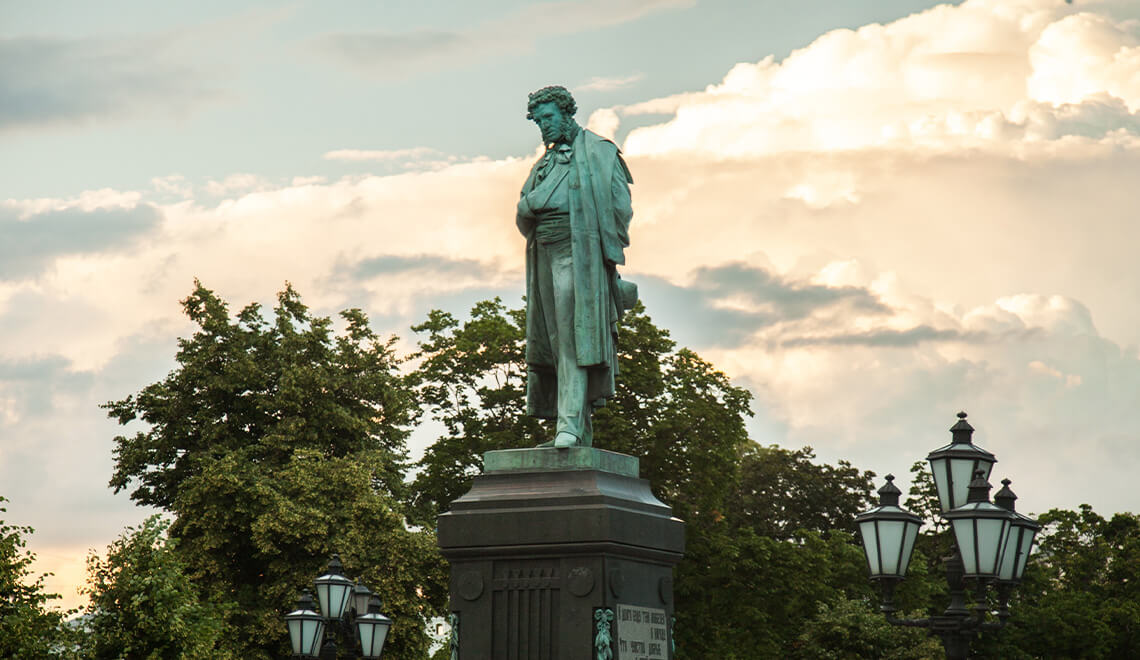 Russian, as a language, has always been elusive for me. On the one hand, I should have no excuse not to be fluent, or at the least be comfortably conversational in it, since I was born in Sofia, Bulgaria—a longtime Russian political ally—when Bulgaria was still a communist country. So for us Bulgarians, Russian was actually required learning starting in the second grade. On the other hand, because studying it had been so tied to Bulgaria’s own political relationship with Russia at that time, the mandatory aspect of learning it went away as soon as communism in Bulgaria (and in Russia, more or less) fell in 1989. That meant I had two solid years of learning the rich, complex language, Russian text on the left, Bulgarian text on the right—the efficacy of which was endlessly debated by my parents, both fluent in Russian. I can say that at one point I could proudly recite Pushkin’s masterpiece poem Узник (Uznik – Prisoner) in Russian, although, much to both my parents’ disappointment, this has, alas, long been forgotten.

For someone like me, one admittedly huge advantage to even attempting to learn Russian from scratch is that the Bulgarian and Russian share an alphabet—the Cyrillic one, which, unbeknownst to many, was originally developed in Bulgaria before traveling to over 50 different languages across the world.

Today, my motherland is a relatively tiny country (comparable to the state of Tennessee) in the South of Europe. It borders Greece, Turkey, Romania, Serbia, Macedonia and, most beautifully—the Black Sea marks its entire eastern border. Established in 681 AD, it is the oldest country in Europe. Geographically at the criss-cross of civilization, it boasts fertile, beautiful land with mountains, rivers, valleys, caves, and fortresses. As a result, Bulgarian cuisine is a delicious mix of mediterrenean and middle eastern—a unique combination of grilled fish and meats with roasted vegetables, unique-tasting feta cheese and incomparable yogurt.

Bulgaria’s borders were once much wider, and the country was, at one time, a powerful empire.

It was during the reign of the First Bulgarian Empire in the 9th century AD that an early version of the Cyrillic alphabet was first developed by the Saints Cyril and Methodius, replacing the Glagolitic script (itself based on the Greek alphabet).

Today, over 252 million people worldwide use the Cyrillic in over 50 different languages. As I mentioned, with a few small exceptions the Bulgarian alphabet and the Russian alphabet are nearly identical, so although I could technically immediately read Russian, understanding it was something else entirely. With a complicated tangle of cases and tenses, Russian grammar is entirely different from its Slavic cousin the Bulgarian (which is actually no less complex in its grammar, just different), so this proved quite intimidating and insurmountable for second grade me.

Luckily, Russia’s lush literary tradition has been translated into numerous languages, Bulgarian and English among them, which meant it was accessible to me in a few different languages. I suppose somewhat ironically, all the great Russian works of literature I have read I’ve done so in English. So I have massive gratitude to the many literary translators who took it upon themselves to bring these classics across the Russian borders via English. Still, a goal of mine is to one day read them all in the source language.

Here are three favorites, all written during what is considered Russia’s most celebrated literary period—the 19th century, by three heavyweights of Russian literature: Tolstoy, Dostoyevski, and Pushkin. Although written by men, all three novels reveal man’s deep fascination with, and love for, the impenetrable mystique of woman.

Translated into English by Richard Pevear and Larissa Volokhonsky

Tolstoy’s sprawling, 19th century classic, brilliantly rendered into English by Pevear and Volokhonsky, is a timeless meditation on family, class, society, and a woman’s inveterate, dangerous boredom. I think I read this book on and off for three years because it’s massive (and because I have three children). At over 800 pages, the novel is full of spiraling Russian drama that, famously, ends rather badly for the eponymous Anna. So what was Anna’s crime after all? She left her husband and her child in order to pursue an affair, making a slew of questionable choices in the process, but in the end realized something that seems to eternally and perpetually escape high society: true happiness must come from within. It’s a stark reminder that the dark tunnel you’re staring down, that light you think you see? It might in fact be the oncoming train.

Translation: “All happy families are alike; every unhappy family is unhappy in its own unique way.”

Translated into English by Oliver Ready

I read a different translation as a 17-year-old high school senior than Oliver Ready’s, but I still remember the book as a monumental literary experience. Although peers, Dostoyevski’s world was eons apart from Tolstoy’s (who refused to meet Dostoyevski). Whereas Tolstoy was born in the countryside and pursued a more or less comfortable writer’s life enriched by 13 (!) children, Dostoyevski was often broke, in debt, and gambling. Writing to escape his creditors was a way to get out of the perpetual financial hole he dug himself into. And if that wasn’t enough, he was once accused of being a radical thinker organizing against the government and sentenced to die by firing squad. A pardon coming in mere hours before he was to be executed forever changed his ideas on life, death, and God. It is no surprise that Dostoyevski’s novels were so utterly different from Tolstoy’s. “Crime and Punishment” in particular shows a Russia that is poor and in pain; it is a dark, gritty, and uneasy work. The main character, Raskolnikov—a  poor, socially isolated student—intellectually justifies murdering an old woman with an axe for money. The story follows what happens after the crime: the remorse, the investigation, the punishment, and Raskolnikov’s unlikely savior—the saintly prostitute Sonya.

Translation: “Pain and suffering are always inevitable for a large intelligence and a deep heart.”

Preceding both “Anna Karenina” and “Crime and Punishment” by some decades is Pushkin’s “Eugene Onegin,” written entirely in verse which has helped make it a very successful opera. The complex rhyming structure carries influences as far-ranging as Shakespeare and Byron, while the plot itself is full of high drama: unrequited then requited but unfulfilled love, a senseless Romantic duel in which the main character kills his own best friend, a naive, earnest young girl becomes an ice queen in the face of rejection. Although the eponymous poor little rich boy Eugene occupies a central place in the story, it is in fact the tortured ice princess, Tatyana, who the story is actually really all about. She is the embodiment of self-sacrifice and disdain for the idea of happiness—which is endlessly intriguing, considering how much time us modern day folk spend consumed by the idea that happiness is somehow a right, something we need to strive for.

How to Ask “How are you?” in Polish Without Sounding Offensive