Homesick for My Home Away from Home: Colombia

I took the red-eye flight from LA and arrived in Cali early in the morning feeling rather exhausted and grumpy, as one would expect. My deliriousness instantly evaporated when I was greeted at the airport by an old friend bearing buñuelos (basically fried, doughy, cheesy corn balls––amazing, I know). He drove me to set every morning 5 years ago and still remembered my favorite Colombian treat! I couldn’t find the words to adequately express how touched I was. “Bienvenida de regreso a Colombia Nathalia. ¿Qué tal su vuelo? ¿Se siente cansada?” This is a formal way of saying, “Welcome back to Colombia. How was your flight? Are you tired?”

I first traveled to Colombia in 2013 to film a movie that shot in Bogotá. Always up for an adventure, I was thrilled at the opportunity to work and live somewhere new. Within days of arriving I had fallen in love with all Colombia had to offer––the lifestyle, the food, the music, but most of all, the people. Since then I have been back to Colombia many times and I feel a part of me is Colombian now––even my family in Spain tells me I speak Spanish with a Colombian accent! I’ve made many great friends over the years and a few weeks ago got to go back to celebrate the wedding of one of my dearest friends. It was another unforgettable experience in my home away from home.

In most other Spanish dialects, the tense of tú is used in conversation with most people, so it would sound like “¿Qué tal tu vuelo? ¿Estás cansada?” But Colombians generally are the most formal of the Spanish speakers and use usted for speaking to almost anyone, even a close friend or family member. Therefore, in Colombia you will find that most of the verbs are conjugated for usted. Conjugations can be one of the trickiest aspects of learning Spanish. In English we typically only conjugate verbs to identify singular vs. plural nouns (e.g. I sing, he sings, they sing). And these verbs remain the same regardless of the formality (i.e. We would address our best friend or our teacher in the form of “you”). To conjugate for usted in regular verbs, you drop the ending and add -a or -e, verus for tú you add -as or -es.

As well as being very formal, Colombians tend to use less slang and fewer colloquialisms than spoken in other Spanish dialects, so I find them to be the easiest to understand. That’s not to say they don’t add their own uniquely Colombian touches––words like listo (used to imply something is understood, whereas in Spain I use it to mean ‘I am ready’) and chévere (when something is ‘cool’ or ‘good’) are as Colombian as buñuelos! 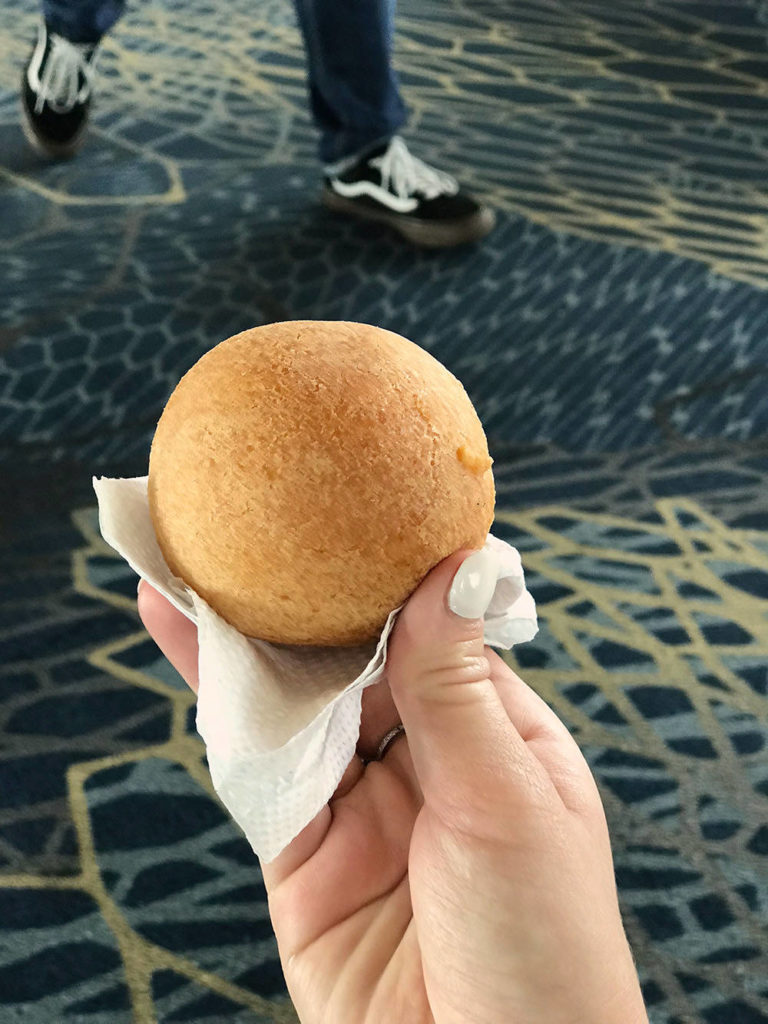 Finally got my hands on some buñuelos. Yum!

Why is Colombian Spanish so formal?

I wanted to learn more about why Colombian Spanish is so formal, so I started to dig deeper. It is difficult to pin down the exact origins of the different Spanish dialects across the Americas, but the history can offer us clues. As I learned while writing my Mexico City blog, it is likely that the first colonizers of Mexico came from Andalusia, not Castile. The first conquistador to arrive, Hernán Cortés, was a rebel who led his own expedition and only sought support from the Spanish Empire after his colonization of the Aztecs. Colombia, on the other hand, was discovered by Alonso de Ojeda while on an official voyage commissioned by the Spanish Crown. These closer political and financial ties could explain why Colombian Spanish evolved to resemble its mother tongue more closely. Another likely explanation could be that the natives living in Colombia at the time of the Spanish conquest, most notably the Muiscas and the Taironas, did not utilize a writing system nor were they politically unified, unlike the Aztecs. The inextricable link between speaking and writing seems to be a clear indicator as to why the Aztecs’ Nahuatl language is so predominant in Mexican Spanish today, whereas Colombian Spanish is far less influenced by its native languages.

Shortly after freshening up at the hotel I went to meet the rest of the group also in town for the wedding at a local restaurant nearby. Having come from all around the world, we were all meeting for the first time. Of the 10 in our crew, there were people from Colombia, Venezuela, LA, New York, and England. Everyone had spent time living and studying abroad in countries spanning every continent. Amongst the 10 of us there were 9 languages spoken––some from birth and others learned later in life. We had an interesting conversation on the origins of language and names. For one, why was Colombia named after Columbus when he never actually stepped foot there? (I looked it up afterwards and there is not a specific reason as to why.) Someone else mentioned that he finds it funny how Americans from the USA refer to themselves as “American” when in fact Americans are people across all the Americas (named after the Italian explorer Amerigo Vespucci). It was a very international crew to say the least and we enjoyed sharing stories of our experiences and travels. Through our diversity we found commonality.

Another highlight of my trip was going to eat lunch at Crepes and Waffles with my new Colombian friend. Crepes and Waffles is a popular chain all across Colombia and in other countries in South America and Mexico. When I lived in Bogotá I would eat there often. What I didn’t know was that this massive chain (84 restaurants in Colombia alone) remains privately owned and was just recently granted B-Corp status, officially making it a social impact business. Their restaurants only hire women, predominantly single mothers, giving women in a male- dominated and religious society employment opportunities. They also make sustainability a priority, sending employees to rural areas and small-time farms who often don’t have access to larger markets and incorporating the ingredients they find there into their menu, rather than the other way around. It is incredibly inspiring to see that you can have a successful and profitable business that still does good for the world and it is no surprise that the birthplace of a restaurant like Crepes and Waffles would be in Colombia. The horror and brutality the country has experienced over the last few decades––its internal conflict has been one of the longest lasting in history and only recently came to a historic end––could explain why Colombians are some of the most politically aware and socially conscious people I have ever met. 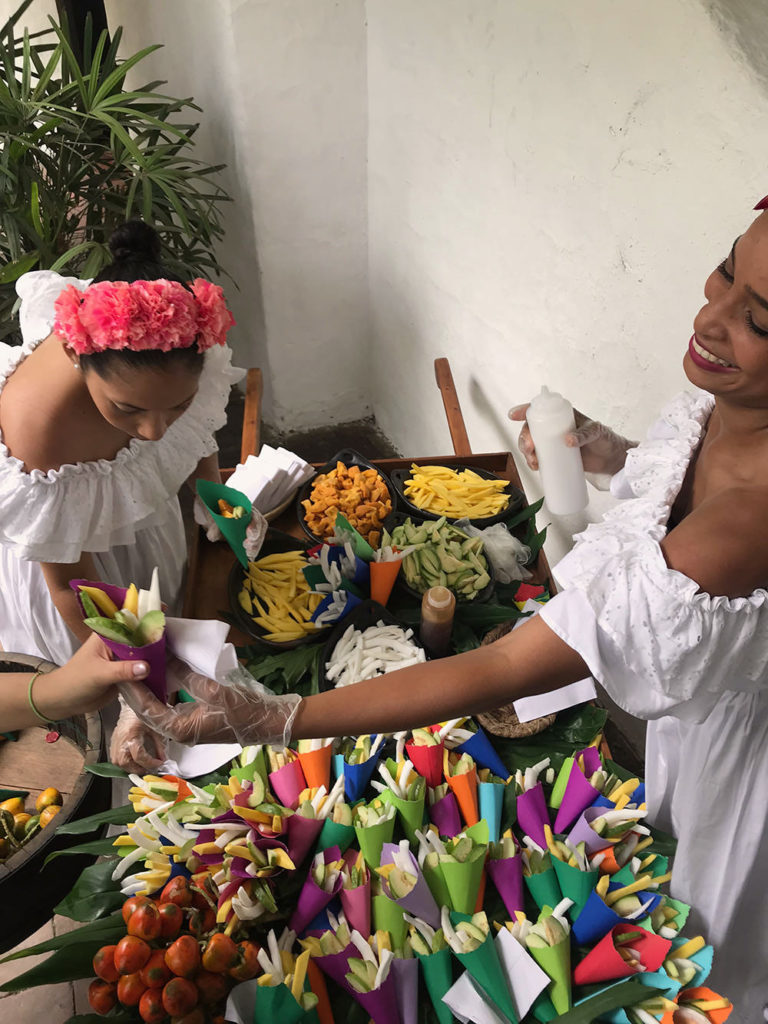 Women entrepreneurs are on the rise in Colombia.

All across Colombia you will meet people from all walks of life who will share personal stories of their experiences during the conflict, are prepared to answer even the most uninformed or cliché questions thoughtfully, never condescendingly, and are eager to show off their beautiful country and all it has to offer. They care deeply about their land, fighting to protect their small piece of the Amazon from big business and supporting campesinos (farmers) and minority communities. I had conversations with Colombians who were very concerned that one of the unintended impacts of the recent peace deal was that it now opens a path for special interests, generally illegal logging and large-scale cattle farmers, to take over path into jungle land that was previously FARC territory. For them, the well-being of their country and their land trumps ideology.

On my last day in Cali, once the festivities had passed and we all started to go our separate ways, I took a moment to myself. Sitting out on the balcony of my hotel room, I looked out at the view of this tropical paradise and wondered what it was that kept me coming back to this magical country. I thought about my friends, both old and new, and the beautiful memories I have had over the years. I realized that buñuelos and salsa music aside, what I love most about Colombia is Colombians themselves. They make me want to be a better person, give back to my community, and treat everyone with kindness and love. Colombians have figured out the magic recipe for making the most out of life––they live large, eat well, and dance all night, then wake up the following day greeting everyone they pass with a smile, thinking about the next problem to solve. They are eager to learn and share knowledge and always do whatever they can to leave their treasured little spot on Earth better than it was when they got there. We should all be a little more like Colombians.