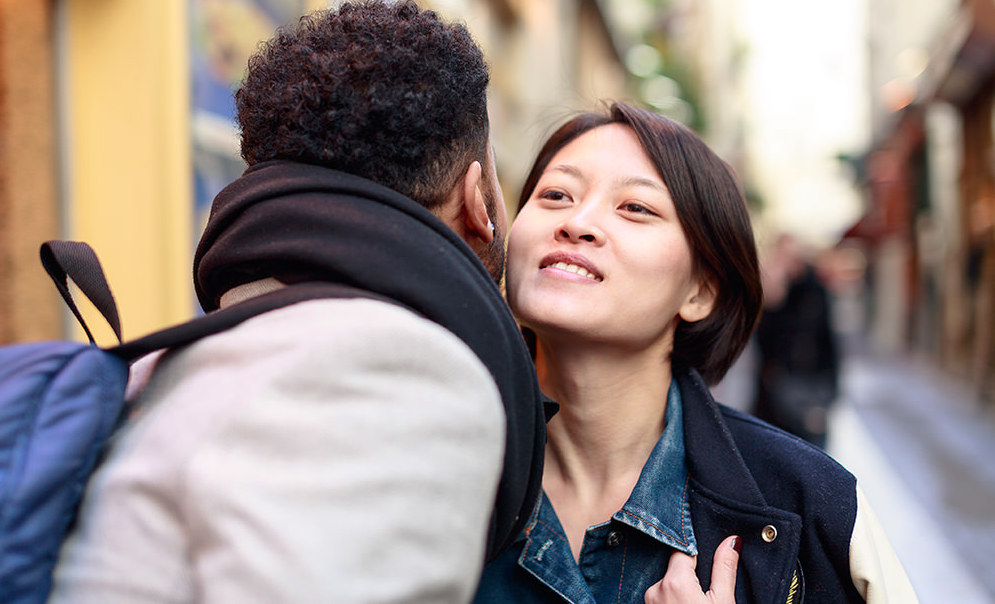 When you can’t find the words to say, translation* functions like those embedded into Rosetta Stone French lessons can be invaluable. Instead of relying on Google Translate, engage the long press gesture on images to get translations for French words so you can remove roadblocks and get back to your lesson. Sometimes though, you’ll need to get more context than French to English translations can offer, especially when it comes to the proper customs for French greetings.

In the French language, manners and courtesy are vitally important. The fact that the word etiquette is from French is probably not a coincidence. The simple matter of saying hello in French is not always as simple as it seems. Here are tips for ten different ways to greet someone in French, from the more formal welcomes among strangers to the camaraderie of close friends.

Bonjour is your bread-and-butter French greeting

The French word bonjour (bon-ʒʊr or bon-zhoor for those of us who don’t speak linguist) is as close as you’ll get to a universal phrase that means hello. It’s appropriate to use in any setting, but because it translates to “good day,” it’s customary to employ it as a greeting in the morning and afternoon.

Salute your friends with salut

Another French word for hello, salut (sa-lʊ or sah-loo), sounds like the English words for salute for a reason. It’s a casual, quick way to greet friends but be careful to leave off the “t” sound at the end to sound like a local.

Allô is hello for the telephone

You’ll be startled to hear the French use a word that sounds remarkably like hello as you pass them on the street, chatting away into cell phones. Allô is a version of “hi”, but it’s specifically used to answer the telephone so don’t just pop it into your everyday lexicon.

A cursory translation of the French phrase Ça va might leave you puzzled, but that’s why context is essential. This uber casual greeting means “Does it go?” but it’s the English equivalent of “how’s it going?” and is typically reserved for situations where slang won’t get any side eye.

Keep it formal with bienvenue

Sometimes you need to observe the formalities, and for those occasions, bienvenue (bjeɪ-venʊ or beu-venoo) will do very nicely. It’s a welcome that you might hear on your way into a shop and that you’ll be expected to reply the same in return before engaging in conversation.

Coucou is as cute as it sounds

This French greeting mimics the sound of a cuckoo bird, and it’s something parents greet children with or close friends might use affectionately. Coucou is not, however, something you can drop into a chat with your boss, or a stranger without earning some strange looks.

Use wesh with caution

When eavesdropping on casual exchanges, you might hear someone say wesh bien or some variation, coupled with the words from the popular French slang Verlan. Proceed with caution imitating this colorful turn of phrase as it means ‘sup and is regulated to certain urban circles. The word wesh itself is borrowed from Arabic and mimics a casual greeting in that language.

Rebonjour is hello on repeat

If you meet someone and then soon after run into them again, you’d use the phrase rebonjour. Unlike some other French greetings which can be puzzling, rebonjour literally means what it sounds like— hello again.

The French word tiens is a form of the verb tenir, which means to hold, but you’ll also find it dropped into conversations as the equivalent of “there you are!” It expresses surprise and pleasure at sighting a friend across a cafe or welcoming someone into a room.

Last, but not least, is the French custom of saying hello without saying a word. La bise is the infamous French air kiss, where you approach close enough to brush cheeks. Depending on where you are in France, this greeting may take the form of two kisses or three, but beware coupling it with a hearty hug. The French are much more likely to extend a firm handshake or la bise than reach for an embrace.

TRY IT FOR FREE