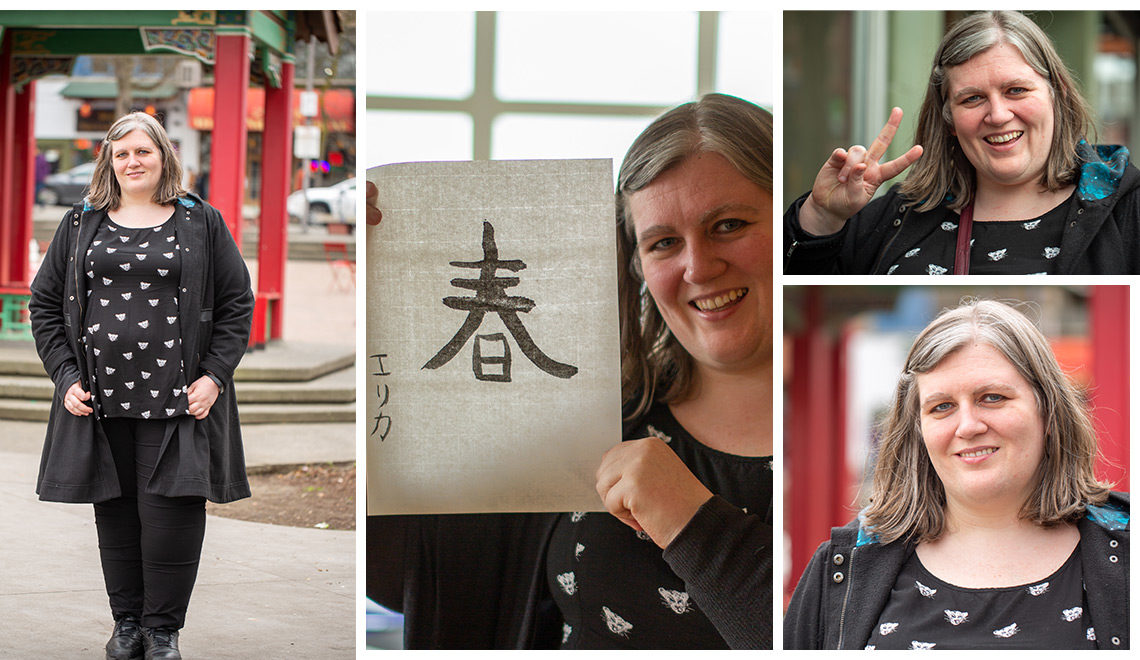 Erika is learning Japanese and joined us on a Japanese tour of Seattle. We asked her about her journey. Read on for her story, her language routine, and the correct way to say sake.

Q: How has choosing to learn Japanese changed your life?

A: Because I learned Japanese, I was able to get a job in Japan. I met the best friends I’ve ever had there. I had the best time of my life there. I was able to meet some of the most generous people on this planet. I met people from all over the world there and had experiences I will never forget. I opened myself up and came out of my shell when I was there. I also understand now what it is like for speakers of a foreign language in my own country. I understand how hard it is to learn another language and for people I have met to be as fluent as they are in English is amazing to me. I am in awe of how much they must have had to work to get so good. Even when they don’t have perfect grammar or say something different than what native speakers are used to. To be able to get your point across and be understood in a second language is so difficult.

I opened myself up and came out of my shell when I was there. I also understand now what it is like for speakers of a foreign language in my own country.

Q: You spent a few years teaching English in Japan. Can you share why you’ve chosen to continue to learn to speak Japanese?

A: I still have a lot of Japanese friends after teaching English in Japan for three years. I want to be able to communicate with them in their language as well as in English. It’s still a fun hobby for me as well. I love being able to talk to Japanese people I meet anywhere in the world. I hope to be able to work with a Japanese company someday, so I can travel for work to Japan.  I also want to visit there often to see my friends.

I started studying Japanese in 2010 when I was trying to get a job in Japan. I took a short 6-week weekly Japanese conversation course with my mom and my brother. I took a longer college course in 2011 where we used Rosetta Stone in our lab time. When I moved to Japan I used the software after work to help keep up with the language. I also used one-on-one Skype lessons from a different site to practice conversation. It is very easy to just use English in Japan and have my English-speaking friends help me get around, but I wanted to be able to help myself. Rosetta Stone really helped me remember the vocabulary especially with the pictures.  Most of the vocabulary that I remember, I learned from Rosetta Stone. After I left Japan in 2014, I used the Skype lessons a lot. In 2015 my employer offered Rosetta Stone for free for employees. I did the whole Japanese 1 lessons in a year to keep up on my Japanese. Once I left that employer I kind of fell out of the habit of studying for a while. Then in 2017, I saw Rosetta Stone was having a Black Friday sale. So I jumped on it and have been regaining a lot of the Japanese I have lost.

Q: What are your thoughts on the day exploring Japanese culture in Seattle with Chef Shota?

A: That was such a fun day with Chef Shota, Rebecca, Kayla, and Paulo! I had a blast meeting other people who speak Japanese and hearing about their experiences in Japan. I love all kinds of Japanese traditional arts and when we did the calligraphy that was great. I have always seen these scrolls on the wall, of the kanji, in this beautiful writing style and it was fun learning about how it is done. It was amazing to see Chef Shota work in his kitchen and the food was delicious! The shop KOBO was new to me. I will definitely go back there. I wanted to buy everything there!

A: I try to have a Skype lesson every week. I have a long commute, so I listen to Japanese learning Podcasts when I drive. I am going to try to get back into the habit of using Rosetta Stone every night for at least a half an hour. I try to use SMART goals for language learning. Specific, Measurable, Achievable, Relevant, Time-bound.  For the month I would have the goal of finishing a unit of Rosetta Stone and put it in my calendar that I would do 1 to 3 lessons a day equaling about 35 minutes. Which was achievable even in my busy schedule.

I took a Kendo class a little bit ago and the Sensei was from Japan, so I got to speak a bit to him in Japanese. I like anime, so when I get time I watch it in Japanese with subtitles so I can hear the Japanese. I’m hoping to get time to go to some Japanese meetup groups to practice more Japanese.

Q: Can you share a story about speaking Japanese or learning about the culture that led to you understanding it even better?

A: I’m pretty sure every time I speak Japanese it is spoken poorly. But I still try to communicate the best I can even if it is not perfect. I would tell my students this all the time. Even if all you can say is, “Pizza… want.” you can get your point across. You just have to try. I learned once pronunciation is important in Japanese. A friend of mine and I were going to a Sake festival.  We didn’t know where it was, so my friend asked at lady the tourist office “Saki matsuri wa doko desuka?” (pronouncing sake the way English speakers say it) and the woman didn’t understand her. I said “ah, SaKE matsuri” and she understood. I was very careful with my vowels after that and making sure I pronounced words in a Japanese way.

I have been on a date with a guy who spoke no English, and we had a fine conversation about jobs and our likes and dislikes and where we are from. I had an amazing opportunity to go to a Mikoshi put on by a local community group. We carried a shrine on our shoulders and brought it to nearby houses to sing a blessing to them. Afterwards there was a huge party with lots of food and drink. I tried my best to talk to them in Japanese and they talked to us in English the best they could. I participated in this ritual several times. They really liked me and when I left Japan, I went to a final meeting with them and they gave me one of the paper lanterns hanging on the wall from previous Mikoshi rituals. I still have it and it is one of my most prized possessions. If I had not tried to speak to them in their own language I don’t think I could have gotten to know them as well as I did.

Intrigued? Watch “Japanese in Seattle” or read another learner interview.