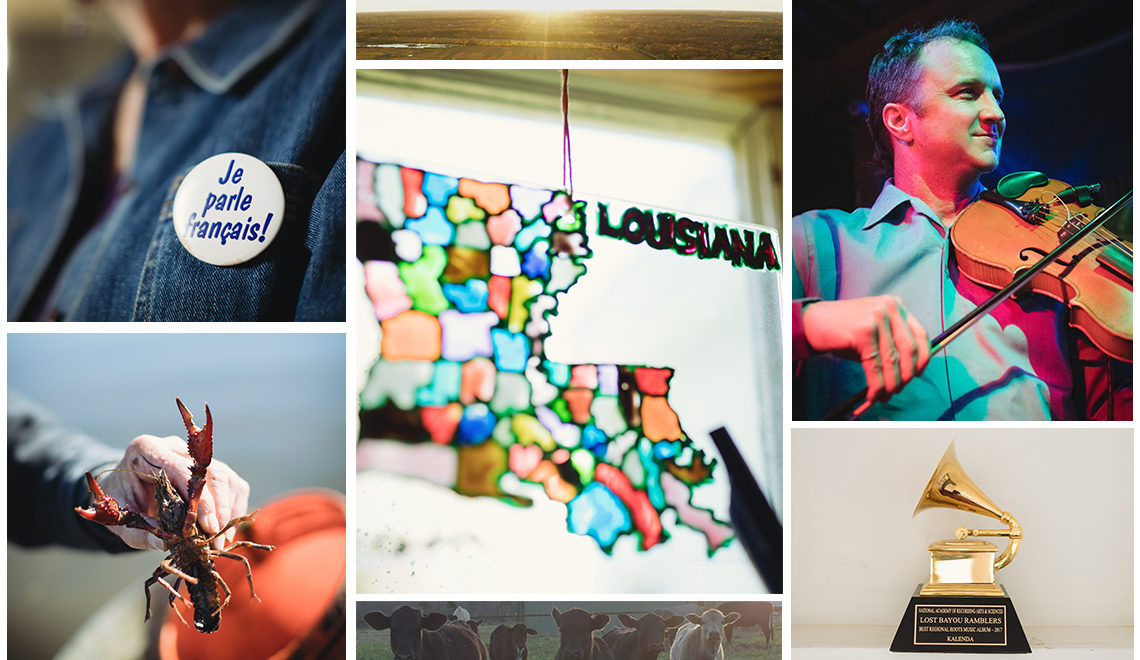 This was my first true Mardi Gras experience, and my assumptions—as assumptions tend to go—were embarrassingly naive.

Yes, I was welcomed at the airport by the smell of beignets. Yes, the French Quarter was littered with gutter beads (which left me pondering creative reuse and recycling woes). But what I didn’t expect was a familial welcomingness from pretty much everyone. I assumed I’d be attending Mardi Gras as a tourist just taking in the debauchery, but I felt more like family by Louis Michot’s side. Maybe that’s just Louis. Maybe Louisianians are just awesome. Probably both.

There’s a French word, retrouvailles, which basically expresses the joy of meeting someone very dear to you after a long time. That’s the feeling I got from Louis after speaking with him once. His energy is off the charts, which made him perfect to lead five Rosetta Stone learners (and a video crew) on a French-immersion tour of his hometown—Arnaudville, LA. Without further ado (BTW not the French word adieux):

Louis is an award-winning musician who’s been playing Cajun music since he was 14. His French roots run deep, and his passion for perpetuating French language and culture throughout Louisiana is contagious. And after listening to him, meeting his neighbors, and taking in a “country” Mardi Gras, I learned something very important:

Speaking French in Louisiana is like knowing a secret code that anyone can get in on.

Lafayette is about two hours west of New Orleans via I-10 off a stretch of roadway suspended above miles of bayou. Near there is Arnaudville—a one-square-mile haven for French language and culture on the Bayou Teche. It also just happens to be where Louis lives, so he took us around town. If you’re ever in the neighborhood, stop by anywhere with a welcome sign saying “ici on parle français” (French is spoken here).

If you’re interested in retracing our journey, here’s where we went and what we did:

Ragin’ Cajuns and a French Tour at Bayou Teche Brewing

This place is legit. You can go pretty much anywhere and find a microbrewery, but how many places can you get a brewery tour in French, meet a Parisian in the kitchen, and talk about (and in) French with staff and locals? Very few, I’d wager. Even fewer that have a natural waste-water system filtering into a crawfish pond. We also sat down with Bayou Teche Brewing’s brewmaster, Karlos Knott, for his story (turns out he’s a long-time Rosetta Stone customer).

Nowhere is French more alive in Louisiana than the hearts of the regulars attending the monthly “French Morning” held at NUNU, spearheaded by the St. Luc French-Immersion School. For 14 years and running, learners of any level come to work their language muscles in a large, yet somehow simultaneously intimate, group conversation. It’s a beautiful thing surrounded by beautiful things, because the meeting ground is also an art co-op/marketplace. Of course, we couldn’t leave without talking to Mavis about her mission to keep French alive in Louisiana.

“A gumbo is a great representation for how French, Spanish, African, and Native American cultures come together.”

When Louis told us we could go to the grocery store and speak French, I had no idea what he really meant was that some of Arnaudville’s residents went shopping with the sole purpose of practicing their French. Forced immersion on the cashiers, I suppose. We went to see how a mundane task could become an opportunity to improve our French, and we weren’t disappointed. We even broke out Seek & Speak to complete a special mission: the search for gumbo.

Homemade Gumbo and a Cajun Jam Session at Louis’s Place

“It’s really hard to get good gumbo or a good jambalaya at a restaurant. You have to have gumbo at a house, at a party, or a family gathering.”

Louis’s gumbo ruined other gumbos for me. It tasted amazing, but also a couple bags of groceries fed a small militia of learners, friends, and family.  We descended on Louis’s place after a long (great) day flipping our brains to French. Yes, he’s blessed to have Cajun-inspired ingredients at the ready via his local grocery store (tasso, I’m drooling at you). But I’m betting anyone, anywhere can make it following his recipe, because you can’t ruin jarred roux.

French to English and English to French and Back Again

Flipping your brain from one language to another isn’t easy, but it’s worth it. Don’t take my word for it. Hear from others about thriving abroad or the joys of passing it down. Whether it’s the people you meet, the places you get into, or the uncommon things you end up experiencing, speaking French in Louisiana is a surefire way to go way beyond Bourbon Street’s busiest night of the year.  Merci mille fois, Louis.