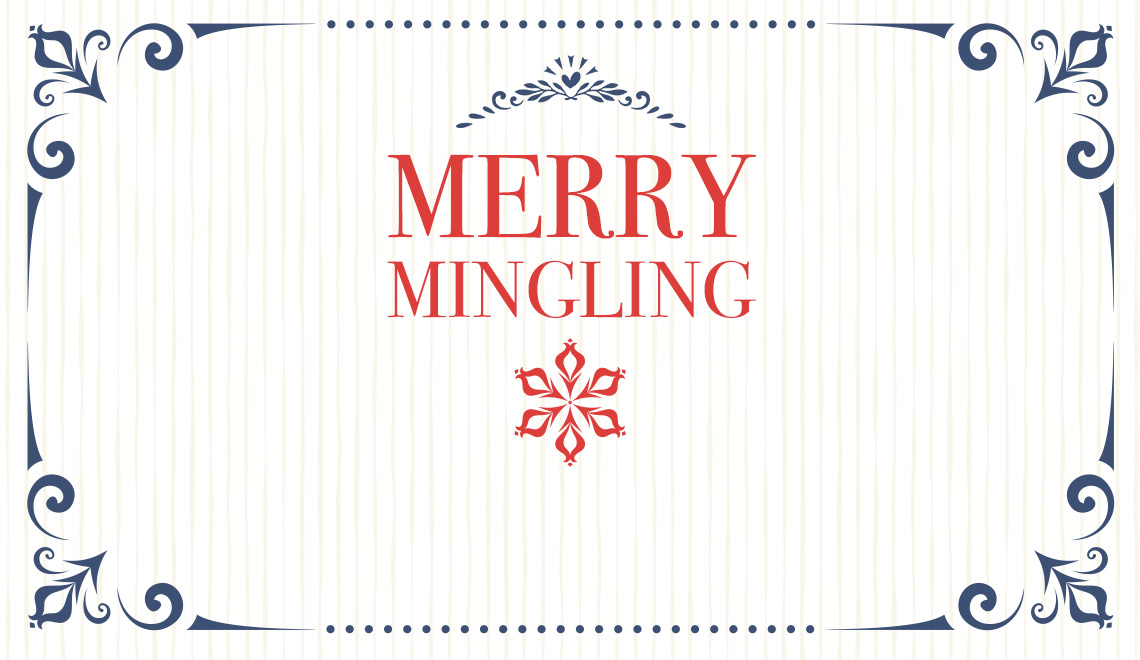 Thoughtfulness and a little cultural sensitivity translate well in any language.

Before you get out there and start mingling merrily, it pays to know a little cultural etiquette. Our international guide to party protocol will help you raise a glass in the most common languages and understand how to rub elbows without committing a faux pas.

First and foremost, don’t commit a blunder before you even open your mouth and arrive to the party empty-handed. Our international guide to gift-giving etiquette will get you started on the right foot before you cross the threshold.

Need a quick reference before tying a bow? Download our guide.

Now that you’re set to arrive in style, let’s tackle how to toast across cultures. Our handy reference below will get you started on how to raise a glass this holiday season in more than a dozen languages.

As you’ll notice, many languages toast to good health, life, or some version of “down the hatch!” While our words might be different, the sentiment of embracing the moment and celebrating our good fortune to simply be alive crosses continents and cultures.

One of the more nerve-racking aspects of attending a party can be understanding the expectations of your host. Is it impolite to wear your shoes indoors? How do you get past that awkward moment when you’re trying to decide whether a handshake or a hug is appropriate?

While every household is different, there are also some rules of cultural etiquette that can help you understand expectations and be ready to extend courtesy to your host and their guests. We’ve broken down some of the most common into a country by country guide so you can minge without misgivings.

Your International Guide to Party Etiquette

When attending a Chinese party, come prepared. You’ll be expected to state your full name, job position, and the place you work when making introductions. If someone else is doing the pleasantries, wait your turn as introducing yourself is considered disrespectful.

One of the reasons to take your cue from the host is that introductions in Chinese have a hierarchy used to demonstrate respect. These are three basic rules to Chinese introductions:

How to toast in Chinese (mandarin)

The Dutch are big on handshakes and they expect them both coming and going from gatherings. Very close friends might kiss one another on the cheek, usually starting with the left and repeating twice while alternating sides. Pay attention to body language, however. If someone is extending a hand, it’s because they prefer not to be kissed.

Hear someone sneeze? Say gezondheid which is the Dutch equivalent of saying “Bless you.” Although the Dutch definitely frown upon religious discussion in public spaces, this is a traditional phrase that remains as a social custom.

​How to toast in Dutch

Proost, “May it be good”

While British punctuality is prized, that value doesn’t extend to parties where it’s considered rude to show up on time and thereby rush a host or hostess in their last-minute preparations. The British are also renowned for their reserve, so it’s no surprise that handshakes are brief and done from quite a distance apart to insure there is no other bodily contact.

How to toast in English

It’s common for Filipinos to shake hands in greeting with everyone present at a social occasion, but those handshakes should be friendly and relaxed as firm handshakes come off as aggressive. And don’t make the mistake of referring to your female host as a hostess. Hostess is actually a term for a female prostitute in Tagalog and will likely get you kicked out of the party in short order.

How to toast in Tagalog (filipino)

The infamous French etiquette surrounding air kissing actually has a name—faire la bise. Both men and women indulge in air kissing or a gentle grazing of cheeks as a greeting, but the number of kisses and the pattern varies by region. In northern France, it’s more common for men to greet each other with handshakes.

If you do find yourself at a French holiday party where they break out the Christmas carols, don’t be intimidated. The lyrics of France’s most popular holiday ditty, Petit Papa Noël, are easy to learn as demonstrated in the video below.

How to toast in Tagalog (filipino)

A votre sante!, “For your health!”

Like the Dutch, Germans are enthusiastic hand shakers and like to extend a hand both coming and going from social occasions. While sloshing your drink around in a hearty cheers might seem like a very German thing to do, they actually prefer to toast by lifting a glass by the stem and nod meaningfully instead of clinking glasses.

Need some German conversation starters? We’ve got you covered with pointers on how to be more conversational in German.

How to toast in German

It’s customary to wait to be introduced at a Greek party. However, once you are, extend a firm handshake to earn respect and don’t be surprised if someone pats your shoulder while shaking hands. European cheeking kissing is only practiced between close friends in Greece.

How to toast in Greek

When entering an Irish party, you’ll be warmly greeted with a handshake and a typical salutation such as dia duit (“hello” or “God be with you”). Be sure to maintain eye contact as a sign of trust and be prepared for friendly and engaging conversations to ensue because the Irish gift of gab isn’t just a cliche.

How to toast in Irish

While Italians are a demonstrative and affectionate people, they generally reserve the infamous il bacetto, or cheek kissing, for intimate friends. Acquaintances and casual friends may get invited to engage in the air kisses or cheek grazing that the French do, but only one on each cheek. Italians don’t take a third pass.

Going to an Italian New Year’s party and want to know more about how to raise a glass? Toast to your good fortune, because we’ve got plenty of advice in the video below.

How to toast in Italian

Europe has air kisses, North America has handshakes, but greetings in Asia usually take the form of a bow. In Japan, this bow can range from a small nod of the head for casual acquaintances to a deep bend at the waist to indicate respect for elders. Arriving at a Japanese party and sticking out your hand is an easy way to misidentify yourself as an inept or rude foreigner.

How to toast in Japanese

Take your shoes off and be sure to come hungry. Russian hosts consider it an insult to their cooking and hospitality if you demonstrate a poor appetite. In greeting, Russians prefer handshakes but don’t extend your hand over the threshold as that’s believed to signify an argument will take place. Women are typically given a kiss on the hand out of courtesy, but wait for women to signal they’re comfortable with this by extending their hand rather than demanding it.

How to toast in Russian

Latin America is a big place, and many social customs vary from country to country. For instance people from Brazil and Venezuela may seem more reserved while those from Peru and Paraguay are typically boisterous.

In general, people from South America will often stand closer than Americans are comfortable with and ask questions that seem personal about financial or relationship status. These kinds of conversation starters aren’t intended to pry but to express genuine interest.

Need help with Spanish conversation starters? Get our tips for striking up an acquaintance in Spanish here.

How to toast in Spanish (Latin America)

Spaniards are friendly and don’t have many hesitations about invading one another’s personal space. Women are typically greeted with the classic European air kiss, which is usually more of a brushing of cheeks on the right, then on the left. Spanish men aren’t shy or standoffish and if they known one another, will likely engage in an abrazo or embrace in public.

How to toast in Spanish (spain)

In Turkey, direct eye contact and a firm handshake is crucial, especially when making a first impression. And don’t worry if you feel a bit crowded in public spaces or during social occasions. Turkish people tend to be comfortable with less personal space than some other cultures like the English and Americans.

How to toast in Turkish

The Vietnamese have some very specific rules for etiquette during social exchanges that you should be aware of before casually sauntering into a party. When items are passed, it is done with both hands. Pointing with a finger is considered rude. Instead, gesture with your whole hand.

Vitenamese also avoid standing with hands on hips or arms across the chest. If you’re unsure what to do with your hands, Vietnamese do encourage handshaking with both hands along with a slight nod of the head to confer respect.

How to toast in Vietnamese

Get beyond raising a glass and into real conversations.

How to Say Hello in Italian

Rebonjour and Other Ways to Say “Hello”...