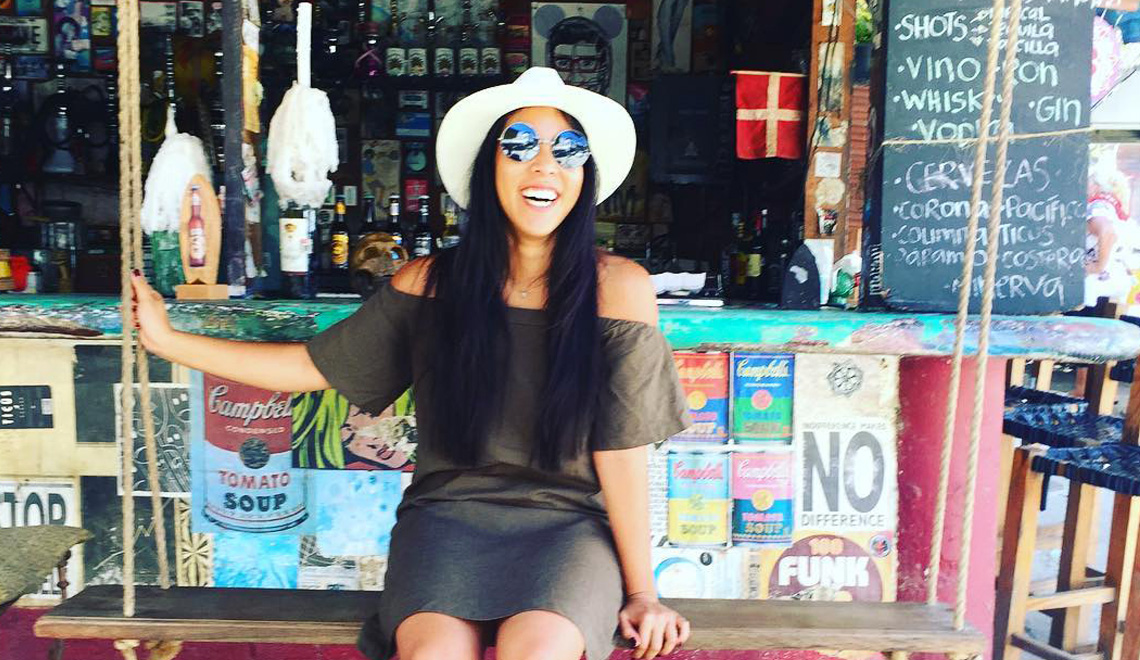 We’re fascinated by the fearlessness of solo travelers, so we asked Michelle Sander (a freelance writer and award-winning filmmaker) to find people living the solo-travel lifestyle and talk about what it’s really like behind the social feeds (with some honest language-learning advice, obviously). We’ll be publishing on #TravelTuesday, so let us know what you think and if you’d like more articles like this.

We caught up with Michelle Luong, an extreme solo-traveler who’s moved over 20 times, setting up shop in 10+ countries, four of them in Latin America. She works as a brand manager; schlepping her laptop from the jungle to the city to the beach and back again. She admittedly loves change, which is a good thing in the hustle and bustle of her current homebase, Mexico City.

I am in constant awe of how vastly different but also how similar we all are.

Q: Tell us, how did you catch the travel bug?

A: I’m first generation Vietnamese American. I grew up in the suburbs of Philadelphia in a very diverse town where White Christians were the minority. At university, I met someone who had grown up overseas and traveled extensively. He opened this window to the world for me and inspired my love of travel.

Q: What do you think drives your desire to head into the unknown?

A: People. I am in constant awe of how vastly different but also how similar we all are. People all over the world are generally kind, and I love being able to see that firsthand.

A: Vietnamese was actually my first language. While I was born in the U.S., my parents immigrated there not long before I was born and they were both learning English, so our primary language at home was Vietnamese. It wasn’t until I was three and gearing up for pre-k did I start speaking English.

I currently live in Mexico and I think learning to speak the language of the country you’re in takes building relationships to the next level. I’d love to be able to have conversations in Spanish. Spanish is the 2nd most-spoken language in the U.S., so after my time in LatAm, I’d love to be able to speak to people in the U.S. whose first language is Spanish. My parents struggled with English when they first arrived to the U.S. in 1975 and occasionally still. It’s nice to have people be able to communicate with. I love a good language exchange.

Learning to speak the language of the country you’re in takes building relationships to the next level.

Q: How did you get your current level of proficiency in Spanish?

A: I actually took Spanish classes in school from 1st grade through college although you wouldn’t be able to tell. I’d not practiced at all outside of school, and when I traveled through Latin America a couple of years back it started to flood back—but my Spanish is rusty at best.

Q: Tell us about a difficult experience you’ve had attempting to speak Spanish while traveling.

A: There are so many challenging moments of me trying to speak Spanish while living here in Mexico. The locals reply instantly to my Spanish in English, knowing I have no idea what I’m trying to say. The most challenging experience thus far has to be trying to get a copy of my house key made. A locksmith ended up coming to my building to whittle down a key from scratch. He figured it would be easier than sending me off to another locksmith with another key that didn’t work. However, when I had to get a bridesmaid dress hemmed recently, I was able to communicate fully using my very limited Spanish. The dress came back just how I wanted and it was GLORIOUS!

I had to get a bridesmaid dress hemmed recently, I was able to communicate fully using my very limited spanish. The dress came back just how I wanted and it was GLORIOUS!

Q: If you had to choose only one, what’s your favorite travel story?

A: When I first arrived to Prague, I needed to go buy shampoo and conditioner so I walked into a little bodega near my apartment. I couldn’t find what I needed, and so I went and asked the shopkeeper in English only to learn that he didn’t speak a lick of English and I didn’t speak a lick of Czech! Defeated, I started to walk out. Then I heard him speak Vietnamese to his kid and it was like Aha! I turned around and was able to have a full conversation with him. After that, I learned that a lot of the corner shops and convenience stores in Prague were owned by Vietnamese people—some whom I saw so regularly that they invited me to their family holiday parties.

Q: What are a few of your solo-traveling must-haves and why?

A: I tend to travel on trips that are at least one month long. Making sure I have my routines in place is incredibly important. I always end up traveling with my travel blanket (a lightweight one that I picked up in Thailand), my Chromecast, and Alexa so every space I’m in still feels like home.

So many changes happen every day, and if you know to just expect that you’ll be golden.

A: Find the places that excite you and just go! Nothing is forever so if it ends up not being your vibe, you can leave. Be flexible. So many changes happen every day, and if you know to just expect that you’ll be golden.

If you’ve been inspired by Michelle to take off on a far-flung, Spanish-speaking adventure of your own, Rosetta Stone offers lessons in 25+ languages including Spanish and Vietnamese, which were mentioned here. In exchange for sharing her inspirational story, Rosetta Stone gave her a three-month subscription to their award-winning app. If you’d like to follow Michelle on Instagram you can find her @michelletul).

Should I Get a Language Exchange Partner?

Mademoiselle or Madame: Why Madame is Legally...