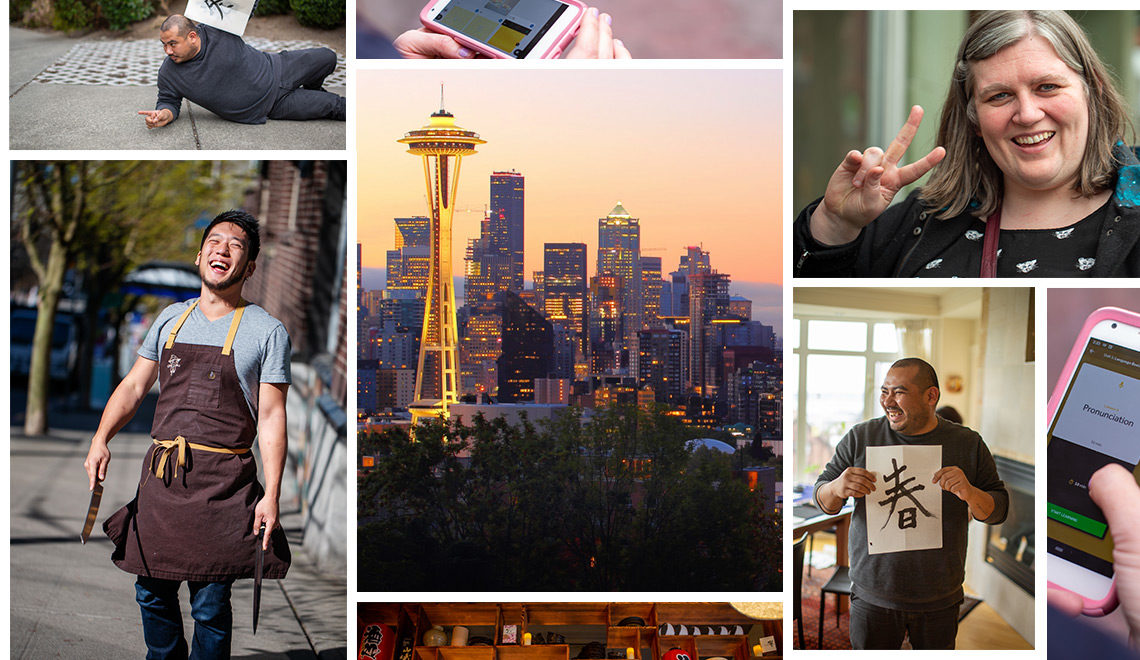 You don’t have to travel the world to use another language (although if you can, you should). To prove it, we’re teaming up with locals to explore American neighborhoods where cultures and languages thrive—and we started in Seattle.

We met up with four Rosetta Stone learners in Seattle’s International District for a private tour of Japanese culture led by renowned chef Shota Nakajima (chef/owner of Adana). If you’re interested in retracing our journey, here’s where we went and what we did.

Getting a Taste of Asian Culture at Uwajimaya Seattle

After a little outdoor ping-pong at Hing Hay Park, we walked over to Uwajimaya Seattle—an enormous Asian specialty store that’s been a Pacific northwest staple since 1928. Chef Shota showed us around (and introduced us to some people he knows) while pointing out a few delicacies you can’t find anywhere else.

“I have long been badly intimidated by the large shop… [Chef Shota] gave me confidence that I knew what I was looking at and where to find it in the store. It’s a great feeling.” – Rebecca, Japanese Learner

We picked up some new vocabulary by completing the “Fruit for Dessert” Seek & Speak challenge before getting distracted and wandering the aisles of Kinokuniya Bookstore. We tried a few different things from the international food court to fill up before our next destination.

We strolled into Seattle’s hilly Queen Anne neighborhood ready for a lesson in traditional Japanese kanji. Little did we know, our teacher (@iyokoqueen) also taught chef Shota in his youth. If you love Japanese (and writing it), this is a must try.

Afterward, we hit up Japantown and toured KOBO Gallery + Shop at a museumgoer’s pace. They sell all kinds of handcrafted goods that are made in, or inspired by, Japan (kobo translates from Japanese as “artist’s workspace”). We easily could’ve spent the entire day here.

“The shop KOBO was new to me. I will definitely go back there. I wanted to buy everything there!” – Erika, Japanese learner

Cooking with Chef Shota at Adana

All that touring built an appetite, so we wound up in Chef Shota’s kitchen. He walked us through the making of the evening’s menu while explaining his techniques, tools, and latest ideas for new dishes. Then we sampled some Japanese whiskey before sitting down with wine glasses in hand as the only guests in the house for a five-star prix fixe. Thank you, chef!

There are obviously a lot more places—and languages—to explore than just these, so if you know of someone or someplace where foreign culture and conversations can be shared, let us know @rosettastone (we might just have to visit).

Want more? Chef Shota also taught us how to sharpen Japanese knives, how to fillet a fish, and gave away his shiso martini recipe.