An interview with Chef Sean Sherman, founder of the company The Sioux Chef.

When Americans think Thanksgiving, they usually turn to familiar narratives from their school days about pilgrims and Native Americans. But these kinds of origin stories turn out not only to be inaccurate but potentially harmful, especially to our understanding of indigenous food and culture.

As many historians have pointed out, turkey was unlikely to be on the menu during the first Thanksgiving. In fact, there are many discrepancies between the mythology surrounding the celebration of Thanksgiving and the reality of that historical experience. The most significant of these is the whitewashing of the experience of indigenous people in America.

Sean Sherman, an Oglala Lakota chef and founder of The Sioux Chef, wants to change public perception not only of the Thanksgiving holiday but also of the importance of indigenous foods to modern-day society. His cookbook, The Sioux Chef’s Indigenous Kitchen, won the James Beard award for Best American Cookbook in 2018.

For our final installment of Honoring the Harvest, we sat down with Chef Sean Sherman to discuss the troubled history of Thanksgiving, how to honor indigenous foods in our celebrations, and his vision for revitalizing North American cuisine. Below you’ll find a transcript of our conversation accompanied by audio. Stick around to the end to get a peek at a Thanksgiving recipe that features indigenous foods.

Q: You probably get a lot of these sorts of interviews at this time of year. I apologize for asking you the question you’re probably tired of answering. But what misconceptions do you think people still have about Thanksgiving that are frankly kind of harmful?

A: It all really stems from this origin story that celebrates this ideology of harmony and unity among the indigenous population and the first colonists. When you really dig into the history, you don’t have to dig very far to realize how untrue this vision is and how unfair it is to so many people.

When you look at just the basic history of Thanksgiving when it really comes into play during President Lincoln’s presidency from Sarah Josepha Hale and really trying to celebrate that colonial past of basically white America. It’s just so exclusionist. During that time period in history in the 1860s, it’s a really harsh time period for my ancestors, particularly in the west. A lot of the battles that happened under President Lincoln’s presidency, a lot of these really awful native massacres were going on. You have both the Sand Creek massacre in Colorado and the White Stonehill massacre in North Dakota where hundreds of people are murdered and mutilated. On top of this awful history, we’re still reeling from the Civil War and there’s all the reservation stuff and so much deep racial history is spawning right there at that time period.

(Thanksgiving) is a story that was sold to the American public and it starts to get pushed at the turn of the century. I think it’s so obvious to anyone who is not from New England and not white that it’s a really, really unfair history to be depicted that everything is so good and so happy and obviously the history is so much different. If you really want to create a celebration and a holiday around unity, you really have to include all cultures because we’re a multicultural nation. And if we’re going to be utilizing any of the histories of the indigenous people, we should be telling the true stories and not whitewashing the history. It continues to damage our relations as indigenous people with this land.

Q: You sort of segued me beautifully to my next question, which is are there ways that you think we can celebrate the holiday that doesn’t contribute to some of the whitewashing?

A: I mean, I think that we just stop utilizing that history, stop pursuing that mythology. Take it for what it is and realize that we can grow as a nation and we can be a lot more inclusive with all the different cultures and a lot more respectful to different cultures. And not make it about a particular culture for any reason. We should just be celebrating a coming together as a nation and celebrating our diversity and not trying to put everybody into one group.

I just really think that we should be thinking about it completely differently and utilizing that holiday for something that aligns with celebrating unity and including everybody. We should just be exploring regional foods and if we want to, indigenous cultures. Because it doesn’t have to be tied to a religion or tied to a culture. It can just be something that we as a nation get together and celebrate a day of thanks.

Q: This idea of a secular holiday that is detached from these other mythologies, I hope, is something that we’re moving towards.

A: Yeah. I think that for indigenous voices, we’ve been able to have a bigger voice to share some of our standpoints and opinions and our histories. And to really get that into the public. The general public is slowly waking up to some of these pieces.

The work that we’ve done with food has enabled us to do something really positive with indigenous culture and history and be able to slowly crack into the mainstream a little bit. It’s given us that stage and that podium to be able to have a larger voice to share some of these concerns. And to do it not in a shaming way but in a positive way. A better way to move forward.

Q: You’re often quoted in different articles as on a mission to bring decolonized foods back into the indigenous food system. Can you explain a little bit about that?

A: Well, I think if you really truly want to understand what is North American food and even American food, you can’t exclude the indigenous people who have lived there for thousands of generations before European colonists showed up. We have to get to a point where we can understand the diversity that’s out there and all the different cultures. So many of them are still alive today with 573 tribes across the US and 634 in Canada. 20% of Mexico is claiming to be indigenous. There’s so much indigenous population.

So if you look at the food, you see how diverse it is because every region there’s so many different flavors, vast knowledge of all the wild plants, and biodiversity of all those areas. And looking at the amazing history of agriculture and all these ancient strains that are still living today and really celebrating a regional sense of food. If you research indigenous foods, you can see that diversity and it becomes exciting to explore how different your region is compared to all the other regions and how unique those regions are. Instead today we have the homogenizing of the same food all across the board.

For us, it’s exciting in a culinary sense but it also brings up so many conversations about history and race and a lot of obvious wrongs that happened to indigenous people in this thirst for taking up so much land and using up so many natural resources.

Q: Tell me why this revitalization that you’re talking about is particularly crucial for indigenous people to experience.

A: When you look at indigenous cultures on a global scale, you see the same history of colonialism happening. Large groups of people on continents all over, not just in the US but all of North American and all of South America, Africa, India, South Asia, Hawaii, Australia, and New Zealand. You see the same situation where there’s really harsh assimilation and really pushing western ideology onto everybody.

And there’s so much value in indigenous knowledge on a global scale because indigenous people really had to live sustainably utilizing plants and animals in their regions for thousands of generations. It’s just so much more sustainable, so much safer for the environment. And there’s so much education behind it, because you’re learning all of the properties of these plants and how your ecosystem really works. We could be creating a lot more food for everybody and empowering impoverished areas—areas that have been pushed into poverty because of globalization.

You can see it very clearly inside Native American reservations in the US and how they are treated today where it’s segregated. There’s so much poverty and there doesn’t need to be. We just really want to showcase all this knowledge about how to grow food, and harvest foods, and utilize our landscape to create medicines, and how that can all be applied in today’s world.

Q: You have this amazing project that I want to be sure to talk about called the Indigenous Food Lab. Tell us a little bit about it and how people can get involved.

So the public would be able to come and try this creative indigenous food that we’ll be featuring with a style of cutting out colonial ingredients. For us, there’s no dairy or wheat flour, no sugar, beef, pork, or chicken. We’re utilizing and exploring what regional indigenous food is.

We’re creating a space where people can come and take classes on indigenous food so they can learn about Native American agriculture, food saving, farming, wild food and botany, plant identification, culinary and food preservation, and history and language. A place for non-western indigenous-focused education. Our goal is to utilize this education and training and work with tribal communities within our vicinity and region, helping them to develop indigenous-focused kitchens that can create much-needed food access and be extremely impactful on a cultural and nutritional level.

We envision doing this all around the US and taking that whole model of Indigenous Food Lab in cities and tribal community extension kitchens and moving all over the place. We’re hoping to open Indigenous Food Labs in cities everywhere in Seattle, Denver, Boston, Chicago, Manhattan. Each one would reach out around itself and help out a lot of the tribal communities and really showcase this cool diversity. If our vision can come true, you’ll be able to drive across North America visiting indigenous restaurants and experience the true diversity of what’s out there in terms of culture and food.

Listen to the interview with Chef Sean Sherman

TRY IT FOR FREE

Avoid the congealed green bean casserole and focus on pre-colonial foods for your Thanksgiving sides. This recipe uses acorn or another winter squash, which you can find in the produce section of most grocery stores. Look for locally grown varieties that are a deep green color. Deeper shades of green indicate the squash is ripe. Avoid orange-colored or yellow-streaked squash because that signals the specimen is either too ripe or picked past its prime. This recipe is published courtesy of The Sioux Chef and printed in The Sioux Chef’s Indigenous Kitchen. 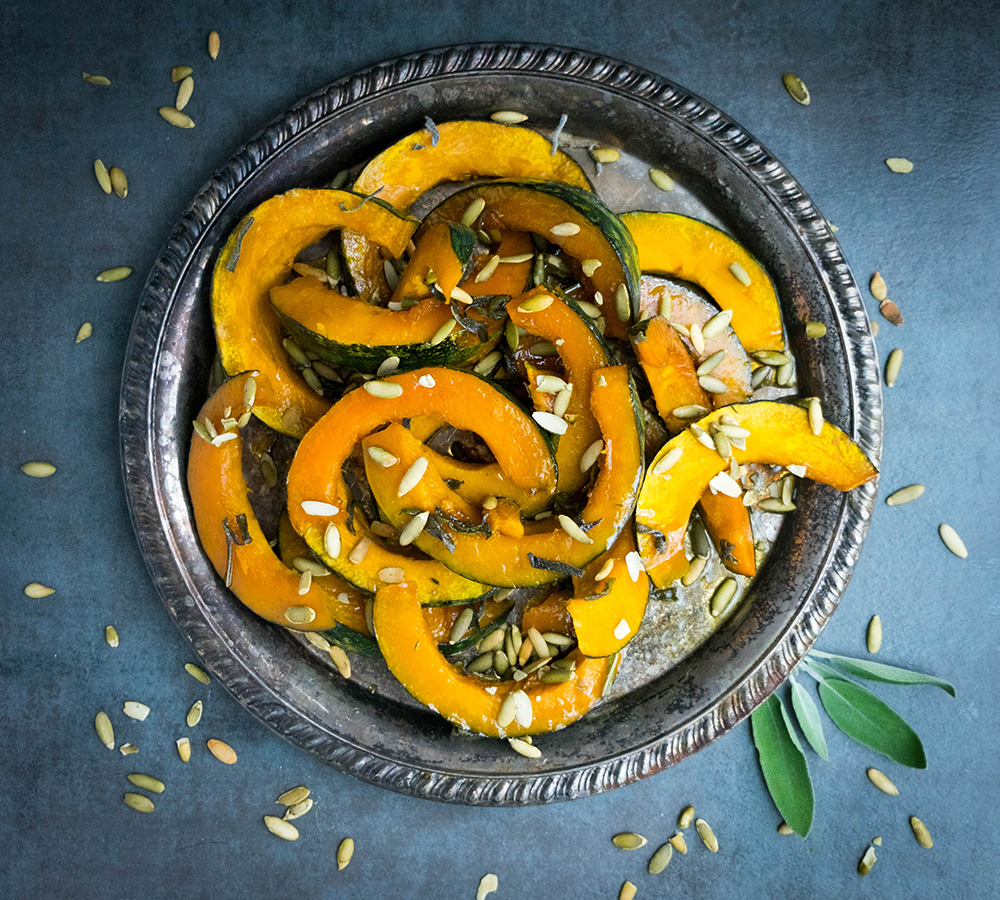 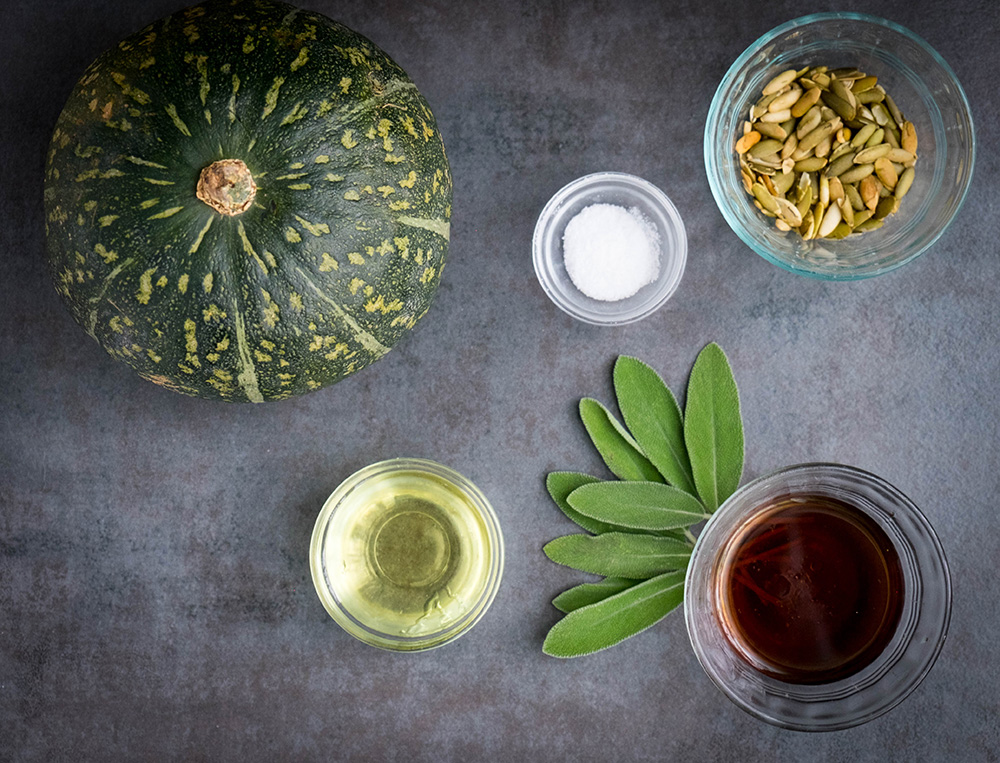 Directions:
1. Preheat oven to 375°F.
2. Place squash sliced into a bowl and drizzle with oil. Season with maple, salt,
and sage and gently toss together.
3. Roast squash for 35 to 40 minutes occasionally tossing around, gently, to avoid sticking.
4. 7 to 10 minutes before roasting is complete, brush a small amount of maple syrup over each piece of squash        and finish roasting.
5. Place on serving platter and sprinkle with roasted pepitas. 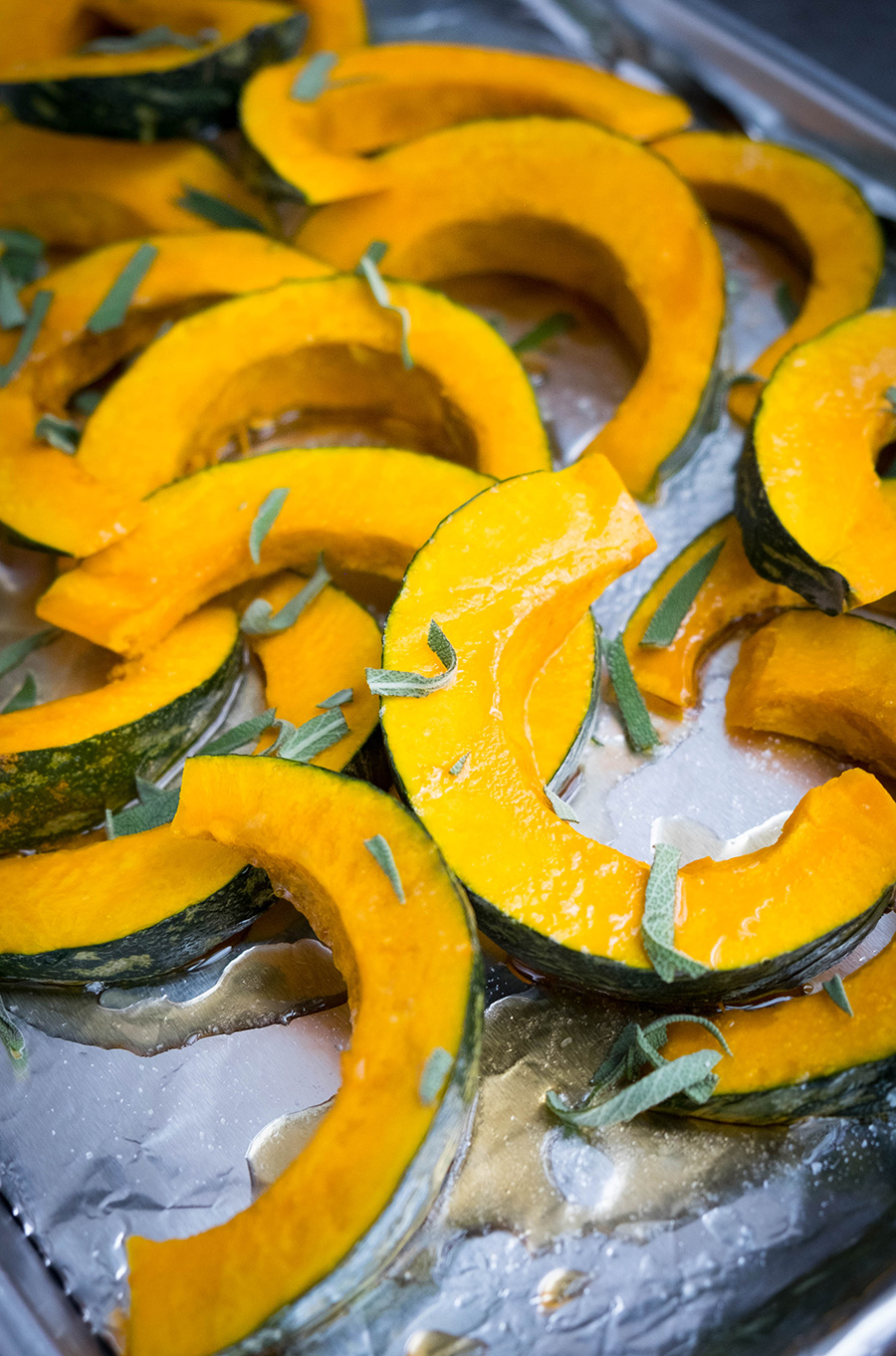 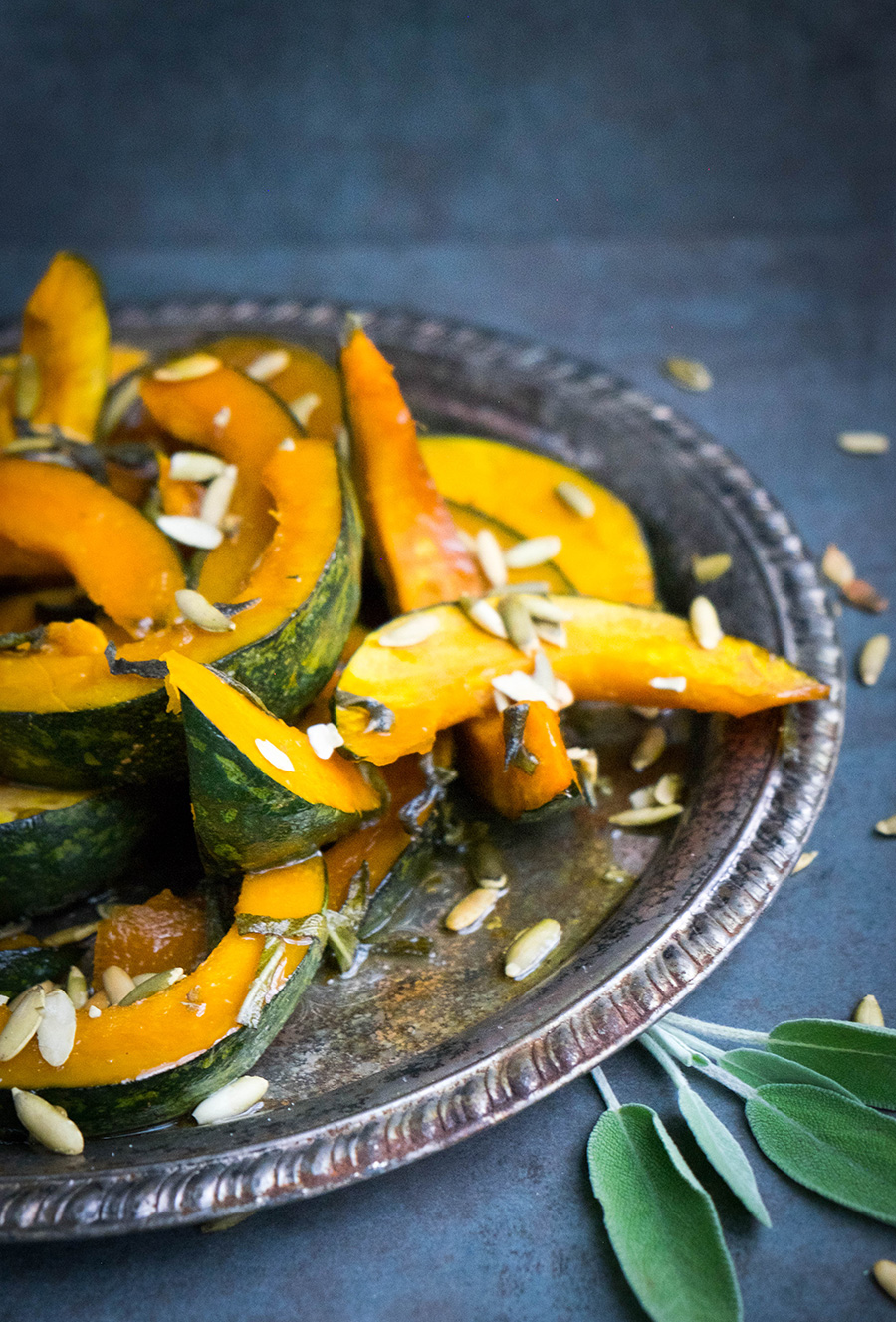 Should English Be The Offical Language of the US?
My Trip to Mexico City: Spain vs. Latin American Spanish