You might be surprised to hear a discussion of Soviet food. Isn’t that the same as Russian food? The answer is both yes and no. Russian cuisine focuses on a very specific area while Soviet cuisine embraces a more complex geographical landscape that includes places like Ukraine, Georgia, and Crimea. While Russian food has an emphasis on the comfort dishes that accompany a colder climate, Soviet food is an eclectic mix of European, Middle Eastern, and even Asian cuisine.

Soups and stews play a pivotal role on tables throughout Russia and the former Soviet Union, especially in the harsher climates of northern regions where residents rely on hearty, high-caloric meals. Moscow’s winter temperatures hover around -30°C (22°F), so the popularity of traditional steaming bowls of borscht and stroganoff to warm the palate is evidence of the natural effect climate has on cuisine throughout the world.

While Soviet recipes do incorporate plenty of hearty fare that relies on potatoes and bread, there are some common delicacies liked smoked or pickled fish, wide variety of pickled vegetables. Many people think black caviar when they discuss Russian cuisine, but you’re more likely to find red caviar gracing Soviet tables for special occasions. Black caviar comes from countries surrounding the Black or Caspian Sea and is typically too expensive for locals even as an occasional indulgence. Smetana, a popular type of sour cream, can often be found on dinner tables throughout Eastern Europe and usually accompanies soups and traditional dumplings referred to as vareniki.

Many associate Russia with copious amounts of vodka, but it’s not the main staple of traditional tables in Soviet cuisine.  Samogon, similar to moonshine in America, rose in popularity because it was easy to produce from simple ingredients at home. In regions like Georgia and Crimea, it is wine from local grapes that accompanies meals and has garnered an international reputation. Winemaking has been a cornerstone of culture in these countries and dates back nearly two thousand years, specifically in the celebrated vineyards of places like Massandra, known as Tsar Nicholas II’s showcase winery.

Pull up a chair at a table serving Soviet cuisine, and you’re likely to share some of the following dishes.

Starches like potatoes, bread, or dumplings do make up the backbone of Soviet meals for good reason. Highly caloric food is necessary to fuel the energy it takes to stay warm in harsher climates. You’ll also find that a short growing season means the majority of fruits and vegetables consumed in the region are typically canned or pickled to last through the winter.

Anatoliy Fishilevich knows a thing or two about how to can fruits and vegetables. When he was a boy growing up in a small town in Ukraine, he recalls his family canning hundreds of jars of seasonal fruits and vegetables to carry them through the winter. Like many in the former Soviet Union, his family learned to cultivate a cuisine based on the food they could obtain.

“In my childhood and college years—in the 60s and 70s—the Soviet Union always had some kind of shortage of food. So it’s not like today when you want to make Italian, and you have a list of ingredients, and you run to the local supermarket and buy everything that you don’t have at home. Because all you had at the local supermarket was half empty shelves—that’s why sometimes you cook what you have.”

He says people in his village got very inventive with the ingredients they had and often, they’d pass down these recipes from generation to generation among locals. Anatoliy recalls many shared recipe books circulating among his family and neighbors in the Ukrainian town where he grew up.

“My mom, my grandma—people tried to share recipes, so every household had an old book, a written book that had my mom’s recipe, my grandma’s recipe, neighbors, co-workers, friends that they shared. When you are a kid, you don’t know much about food. You just eat what’s there. And that was enough for me. My mom was a good cook. My grandma was a good cook. My aunt  was a great cook so I thought this was about as close to heaven as you could get.”

While Ukraine borders the Black Sea, Anatoliy recalls his home was many hours inland so sea fish wasn’t a regular staple of their diet. Instead, they relied on stews and hearty dishes that made the most of the meat they could obtain. While they’d had food shortages growing up, Anatoliy reports it worsened dramatically when the Soviet Union began to collapse in the early 90s. Supply chains were disrupted and the destabilization of the currency led to severe inflation.

When the opportunity presented itself, Anatoliy decided to bring his family to America as refugees under the Jackson-Vanik Agreement, signed into law in 1975 by President Ford. This trade bill has since been replaced by the Magnitsky Act, but throughout the 70s and 80s, it allowed easier immigration to millions of Soviet Jews in Eastern Europe.

“My in-laws were not that healthy and needed good medical assistance. My son was 10 or 11 years old when we immigrated to America. There was an opportunity for Jewish people to immigrate as refugees because of all the discrimination against Jewish people in the Soviet Union and Russia.”

Anatoliy and his family enjoyed innovative cuisine, so immigrating to America where there was a greater abundance of food allowed them to incorporate a variety of recipes into their daily life. At first, when they arrived, Anatoliy says his wife did much of the cooking, but now that he works at home, he’s taken over the kitchen a majority of the time.

He recalls one weekend when his wife was particularly busy at work and his family was hungry, so he pulled a book off the shelf and made a traditional recipe of Hungarian goulash. Since then, he’s become a passionate chef and says he now has nearly 300 cookbooks gracing those same shelves.

Pastry is a particular favorite of Anatoliy, and here he’s shared a traditional family recipe for sour cherry pies, handed down from his mother and grandmother. Tart cherries are more popular in Russia and Ukraine than sweet cherries and easily available in season or as preserves. These small pies are similar to hand pies or dumplings and contain a small portion of fruit, wrapped in a yeast-based pastry dough.

Anatoliy says that recreating this recipe was a bit of a challenge because his grandmother never actually wrote it down. When he’d ask her about portions of flour or butter, she would shrug and say “until it’s right,” so he’s created this written version of the sour cherry pie recipe by experimenting and using his skills as a home pastry chef. Anatoliy recommends using morello cherries, which can be found fresh in some ethnic stores or canned in light syrup in grocery stores. Just be sure to drain the cherries properly, so the juice doesn’t leak out or make for a soggy pastry, but don’t rinse or dry them. You’ll want to retain some of the syrup to provide sweetness to the naturally tart cherry filling of these traditional Ukranian fruit pies. 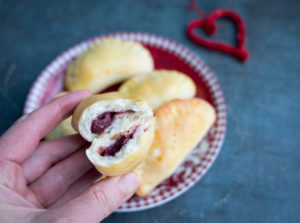 Dissolve the yeast in ¼ cup water.  Stir in 1 teaspoon of sugar and let stand 5-10 min until foamy.

Add the remaining water, sugar, butter or margarine, eggs, and salt. Blend in flour, ½ cup at a time until the mixture holds together. Knead the dough by hand or using a stand-up mixer until smooth and elastic. 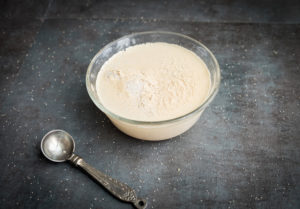 Place in a greased bowl, turn to coat. Cover with a towel or plastic wrap and let sit at room temperature until double, about 1 – 1 ½ hour (or in the refrigerator overnight). 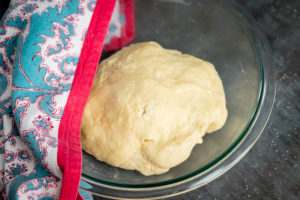 Punch down the dough and prepare baking sheets; lining them with Silpat or parchment paper.

Place cherries in the colander to drain them. 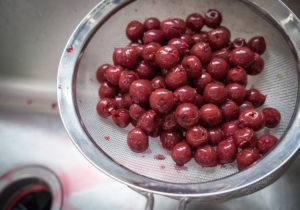 Cut the dough in 3-4 pieces and roll each piece on a lightly floured surface until it’s 2-3 mm thin. Use a round cutter (2.5 – 3 in) and cut circles. Place 5-6 cherries on the circle, sprinkle with ½ t of flour  and ½ to 1 tsp of sugar to help absorb extra juices and sweeten the cherries. 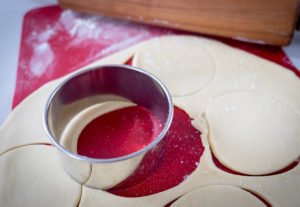 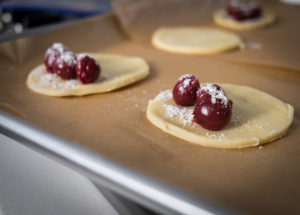 Seal the pies and place them on a baking sheet 1 inch apart (they will expand). Cover with a towel and let stand 20-30 min. Brush with egg wash and place in the preheated (375 F) oven. 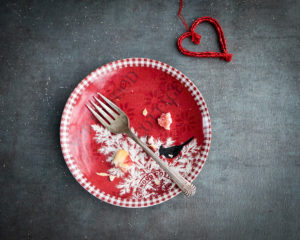 Ready to move from authentic cuisine to real conversations?

The Stories of IRL Eloise: People Who Live in Hotels

Word of the Day: Learning One Greek...

Is Jazz the Titan of African American...