Honoring the Harvest: Celebrate the Mid-Autumn Festival with Mooncakes 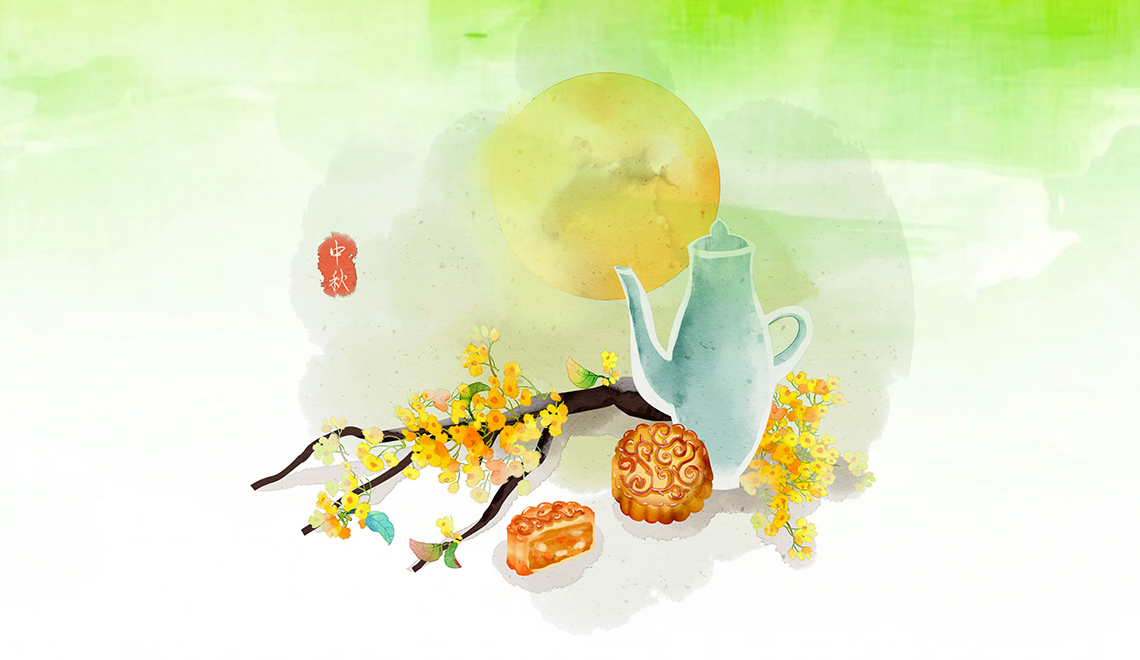 What is the Moon Festival?

The Moon Festival often referred to as the Mid-Autumn Festival (中秋節), is a harvest festival celebrated across much of Asia. Zhōngqiū Jié (中秋节), is the official name of the festival in Mandarin and it is widely celebrated in China with a large family feast that culminates with eating mooncakes.

The symbolism of the mooncake traces back to the history of the Mid-Autumn Festival, which was established to celebrate the autumn full moon during the Shang dynasty. It gained more popularity with the reign of Emperor Xuanzong who held formal celebrations in his palace. By the late 19th century, Empress Dowager Cixi had created elaborate rituals surrounding the festival that worshipped the moon goddess as a symbol of rejuvenation and reunion.

Who is the Moon Goddess?

A popular piece of folklore that has become a centerpiece of the Mid-Autumn Festival is the legend of Chang’e (嫦娥) (pronounced Chung-err), a lunar deity known in Chinese culture as the Goddess of Immortality. The story, which is often told to Chinese children, introduces a hero named Hou Yi (后羿), who was a great archer.

During the time when Hou Yi lived, there were 10 suns in the sky and this caused disaster for the Chinese people. Hou Yi shot down nine of them and to thank him, the Queen of Heaven, goddess Xiwangmu (西王母), gave him the elixir of immortality. But Hou Yi didn’t drink it because he loved his wife, Chang’e, and wanted to stay with her on earth. He asked Chang’e to watch over the potion when he was away. Instead, Chang’e drank it although some version of this mythological story said she did so to keep it safe from a thief.

Chang’e, who is sometimes referred to by Chinese children as “the beautiful lady in the moon,” is said to have flown to the moon, taking rabbits with her. She lives there to be near her husband and when the moon is at its fullest, the Chinese people celebrate by lighting incense, launching lanterns, and eating mooncakes. They also gather for a family feast to reunite with loved ones and honor the legend of Chang’e who can no longer be with her husband but serves as a symbol of love and fidelity.

You can watch a version of the legend of the Moon Goddess,Chang’e, here:

When is the Moon Festival?

The Mid-Autumn Festival or Moon Festival falls on the 15th day of the 8th month according to the Chinese lunar calendar. This means the festival happens mid-September, which is the time of year when the moon is at the fullest and brightest in the sky. People in China usually have a day off from work and often celebrate the festival in conjunction with the weekend for a longer holiday. 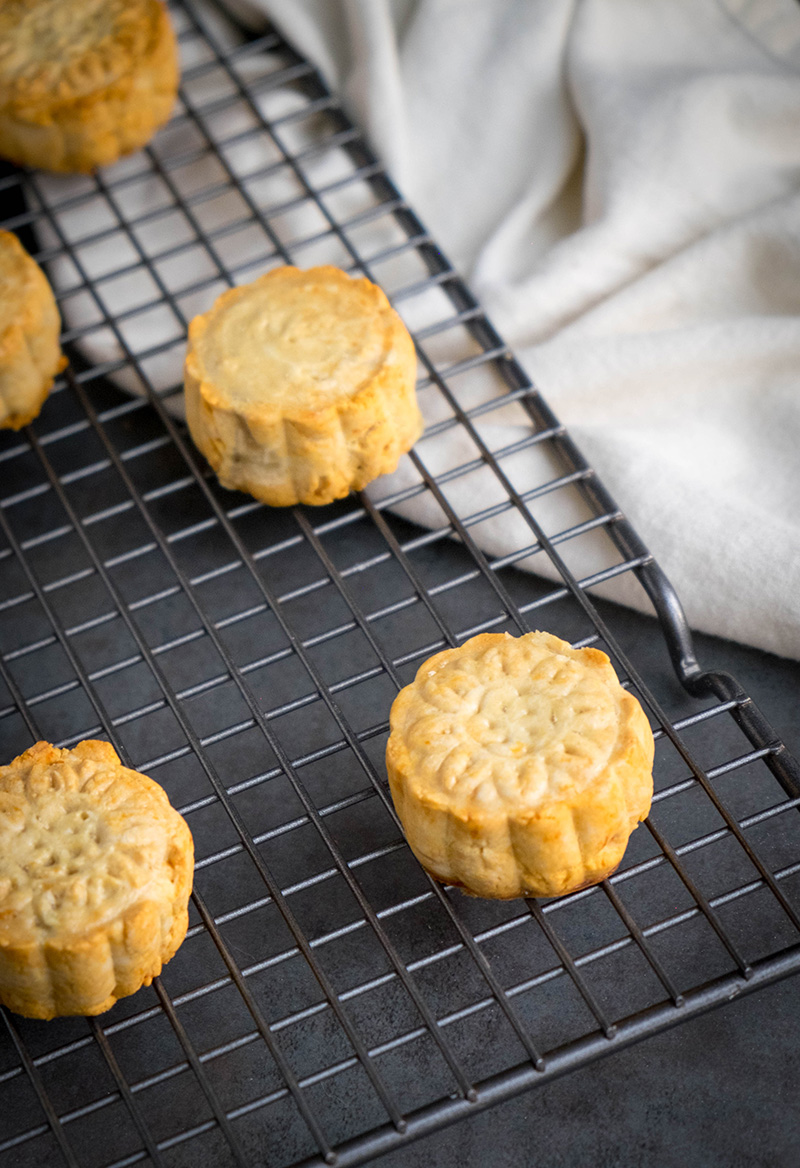 Mooncakes are an essential part of traditional Mid-Autumn Festival celebrations. You can buy the cakes weeks in advance from bakeries and Chinese grocery stores, but some people make them at home. Mooncakes are also often wrapped or given in elaborate boxes during the celebration to express appreciation.

Chinese mooncakes are small, round, intricately decorated cakes sometimes featuring salted egg yolks wrapped in a filling. They’re usually sweet but the fillings differ depending on which region of China you reside in. In the north, it’s more common for the fillings to have dried fruits and nuts. In the south, it’s traditional to use lotus paste which is a sort of sweetened spread made from soften and boiled lotus seeds.

Listen to the full interview with Mimi Zhang on celebrating the Mid-Autumn Festival and the symbolism of mooncakes in Chinese culture.

Get a Taste: Try Mooncakes

Mooncakes can be tricky simply because of the specialty ingredients. Canned lotus paste and lye water are available at any Asian grocer, but you can also make your own at home. Many people choose to substitute red bean paste for lotus paste because it’s more frequently available at American grocery stores.

The mooncake molds are an essential part of the recipe and sold online through platforms like Amazon. Just a note that mooncakes are best consumed after sitting for two days as the oils soak into the pastry and make them more supple, so plan accordingly. 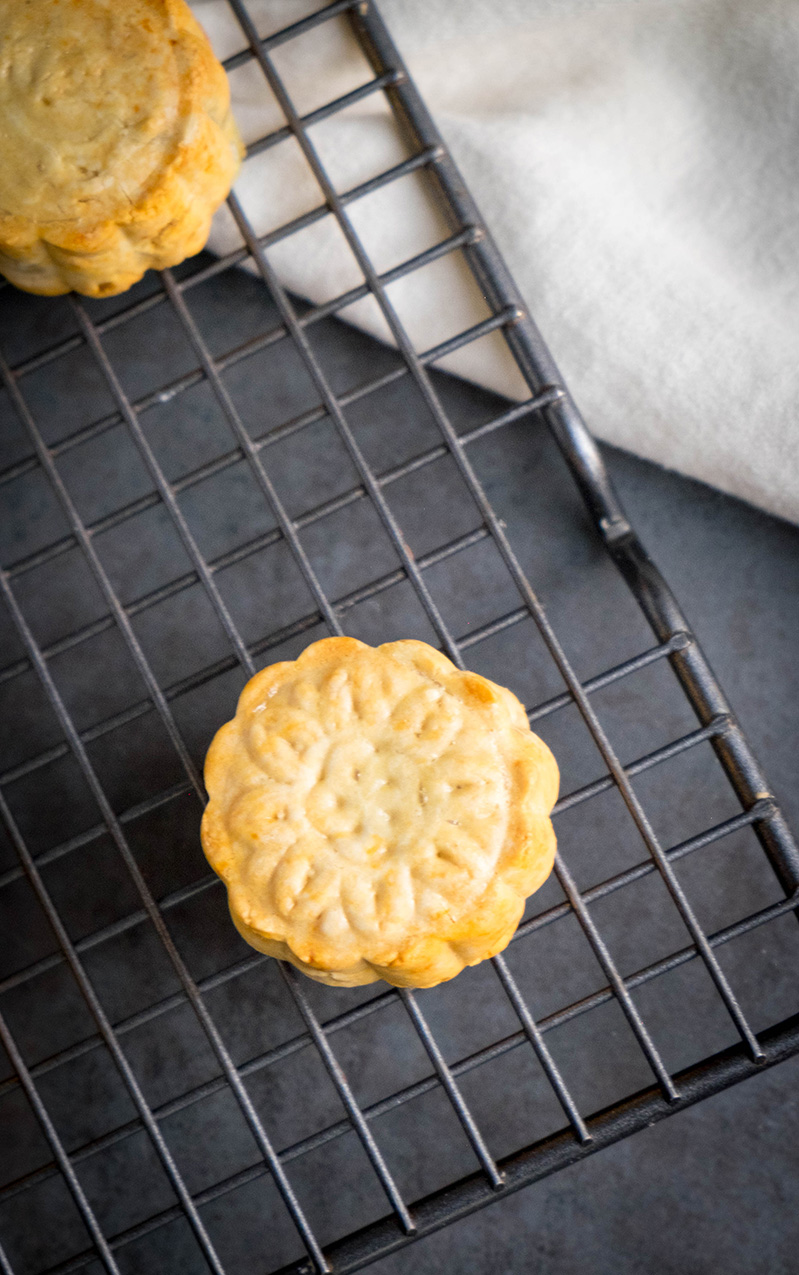 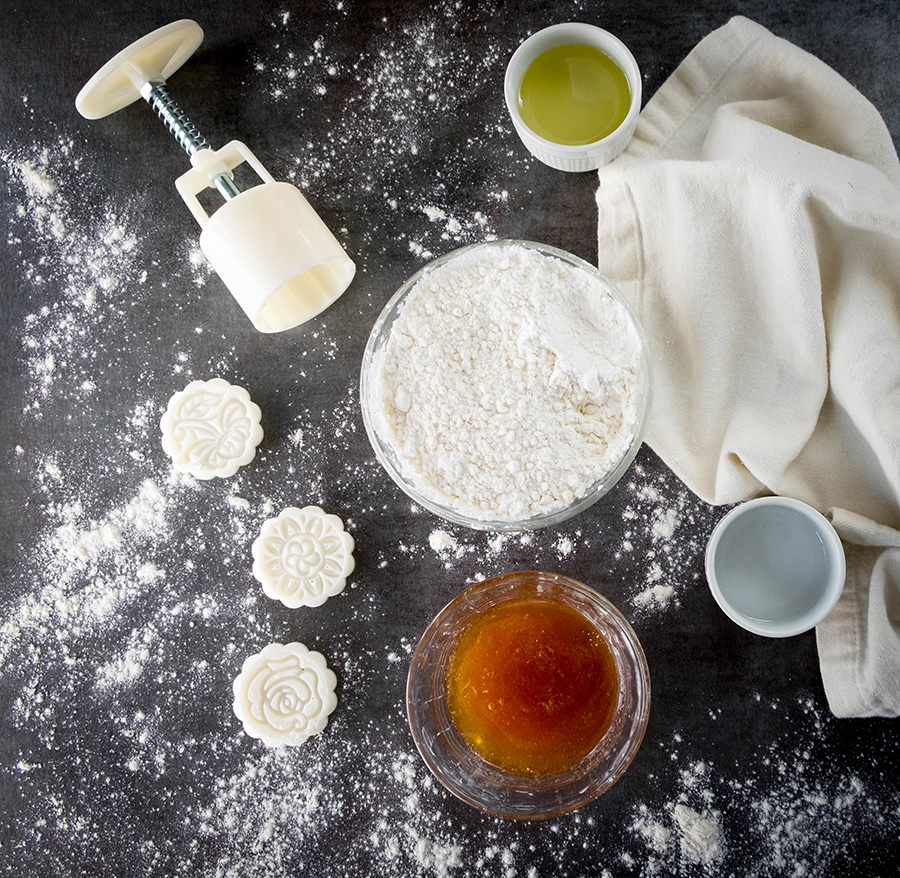 Divide the lotus or red bean paste into 12 equal pieces (about 2 tablespoons each) and roll each into a ball. Scoop a tablespoon of dough and roll it out between two pieces of parchment so that it’s about 3 inches round. Flour your hands lightly. 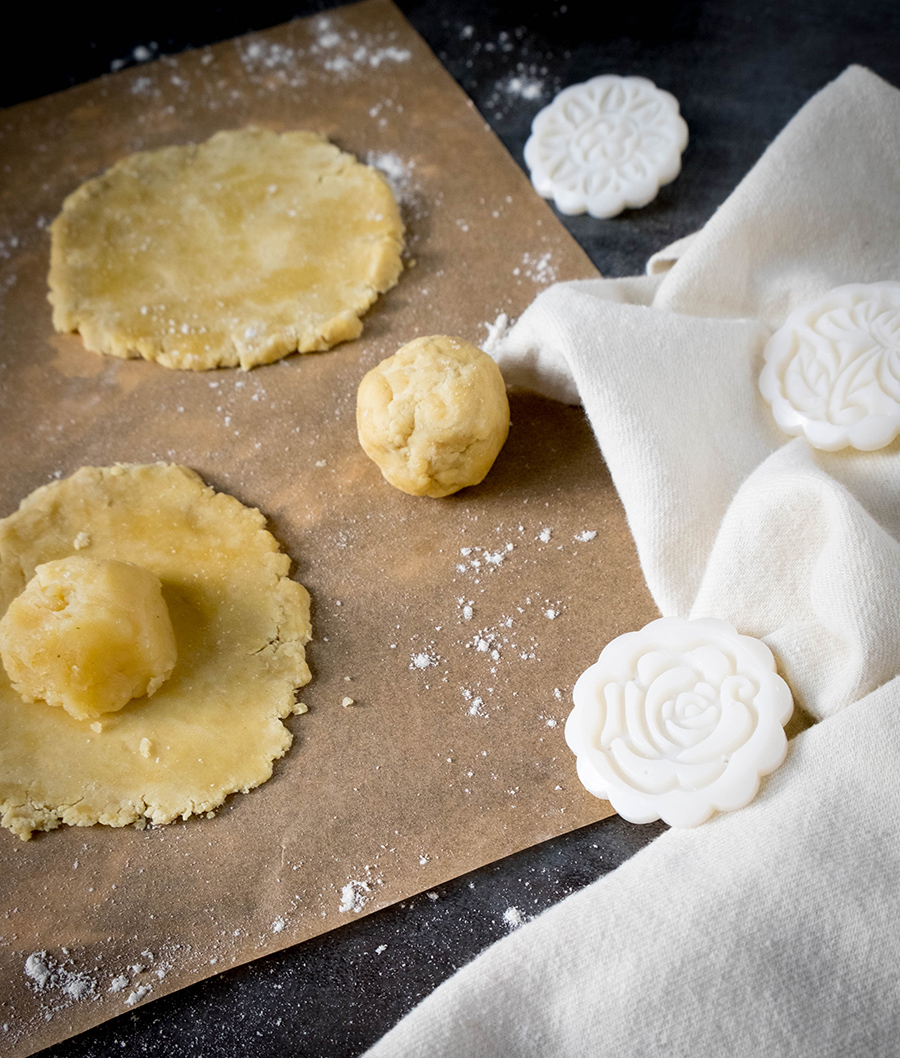 Place a ball of lotus or red bean paste in the center of each dough circle and fold up the dough around the ball. Gently push, press, and squeeze the dough in your palm until the dough covers the filling completely. Place the mooncake ball into your mold and turn it upright on a lightly floured surface. Press the plunger down until you feel resistance, then lift the mold and use the plunger to push the mooncake out.

Place on a parchment-lined baking sheet while you make the rest of the cakes, then bake at 350° F for 8 minutes. Meanwhile, whisk the egg with a splash of water until smooth.

Remove mooncakes from the oven and let cool for about 10 minutes, then brush on the egg wash. Bake the cakes for another 10 minutes until golden brown. Cool and store in an airtight container for about two days before consuming. 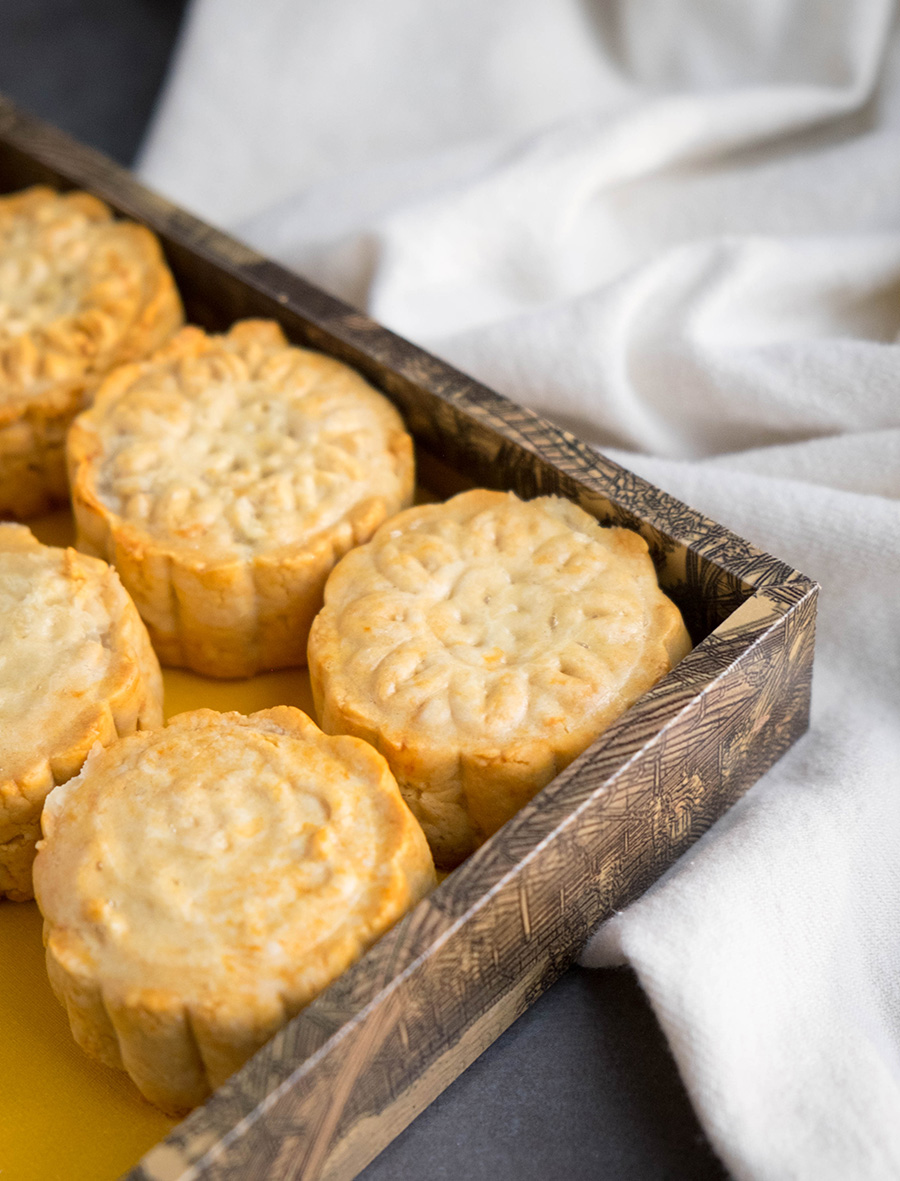 Word of the Day: Learning One Greek...