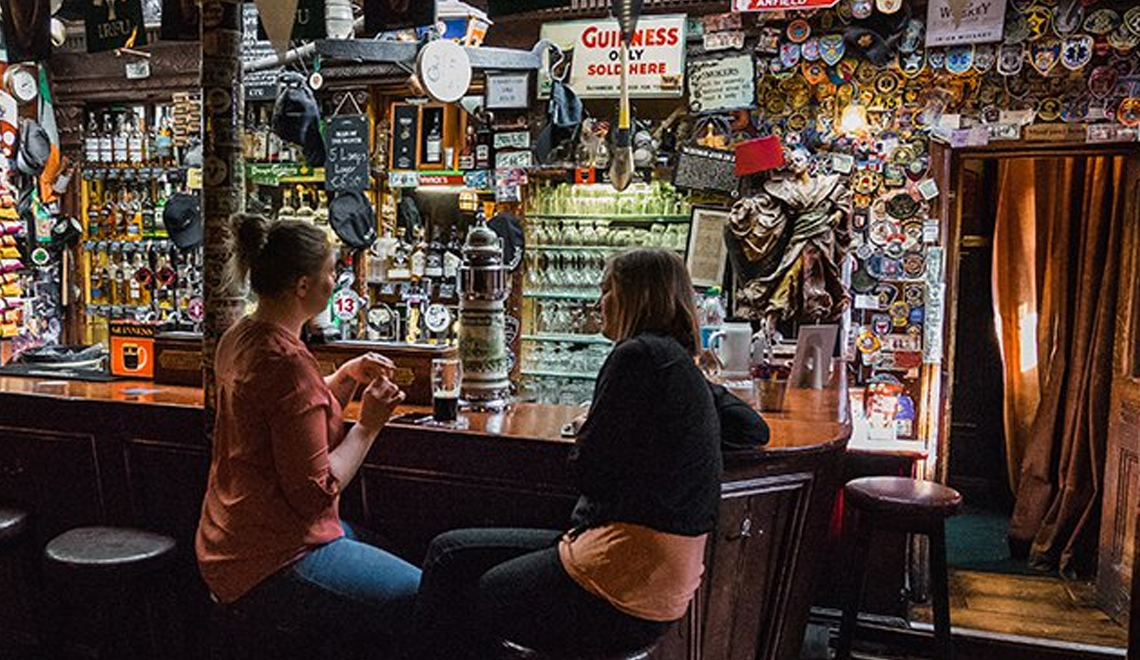 When in Ireland, here’s how to drink as the Irish do. If you’re lucky enough to be touring the picturesque coasts and quaint villages of the Emerald Isle, you’ll run into many pubs along the way. Ireland’s watering holes are friendly, open spaces where the community gathers not just to drink, but to socialize and share with their neighbors. This tradition dates back hundreds of years to Irish laws that required pubs to be open 24 hours, be hospitable to all, and to serve meals for weary travelers. The oldest pub in Ireland is thought to be Sean’s Bar in Athlone, County Westmouth. Coins embedded in the old mud walls indicate it may have been a place of business dating back to 900 AD.

If you venture off the beaten path into rural Ireland, you’ll find yourself frequenting quite a few pubs. They are often the only restaurants in smaller villages, where locals mingle with tourists and share a pint. Before you wade into the cultural fray, you should know that Irish pubs have a long tradition and an entire lexicon. Here are a few points of pub etiquette you should know before you belly up to the bar and attempt to have a drink with the locals.

In Ireland, if you order a pint, you’ll get a Guinness. That’s just how Ireland works. The exceptions to this are in County Cork, where you might get served Murphy’s instead. Murphy’s Irish stout is brewed in Cork, Ireland and is a local favorite. And if you do order a pint, be patient. You have to wait about three minutes for a freshly pulled pint to settle or you’ll look like an amateur.

Watch out for the kiddos underfoot. No, seriously. Especially if it’s rural Ireland, there will most certainly be children there. The Irish don’t really drink at home and consider pubs social gathering places to be enjoyed by the entire community. There’s also a good chance you’ll enjoy a spontaneous live music session. These jams break out often as different locals roll in with their instruments. You’ll hear mournful songs referred to as a “keens,” and the livelier, more traditional tunes played in ¾ time that are called “jigs”.

Get your Irish round in. In Ireland, each person buys a round for the table. It’s considered pretty rude to shirk your duty even if you’ve finished drinking. This way, just one person goes up to the bar and gets drinks for the whole party instead of flooding the bar with people.

No smoking, please. Smoking has been banned in Irish public spaces since 1997. If you’d like to light up, you’ll need to be respectful and step outside as the locals do.

Leave Your Leprechaun Hat in the Hotel. The majority of Ireland practices some version of Catholicism and observes Lent, which usually falls during St. Patrick’s Day. Often, this means Catholics and others are abstaining from consuming alcohol. St. Paddy’s Day actually started in America and then crept across the sea in the early 1970s. Some of the larger pubs in Belfast and Dublin may humor tourists but the holiday isn’t widely celebrated in rural areas of the country.

In Dublin for the day and want to do a bit of a pub crawl? Visit these traditional Irish bars that are more than a place to pull a pint. This pub was renovated from an 18th-century church where Arthur Guinness, the founder of Guinness brewery, was married into the bustling bar, restaurant, and nightclub you see today. One of the most photographed landmarks in Dublin, this pub is frequented by politicians from the nearby House of Parliament and is sometimes referred to as “The Doney & Nesbitt School of Economics” because of the spirited debates that take place within its mahogany booths.

Learn Irish and dozens of other languages with Rosetta Stone. Take the demo for free and start speaking.

A Look at the World’s Most Multilingual...